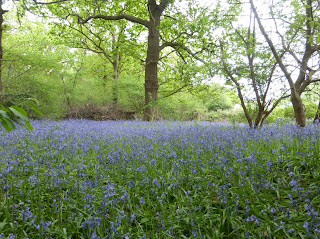 A short walk from Perivale underground station in west London is a wood that's open to the public just once a year, when the forest floor is carpeted with more than five million bluebells. Dozens of people make a note of the day, and journey to see them. 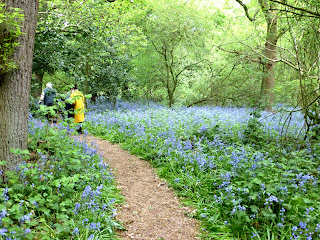 Perivale Wood takes in 27 acres of ancient oak forest and meadow, a remnant of the forest that once covered all of southern England. It was one of the UK's first nature reserves and is owned and managed by the Selborne Society, founded in 1885 to commemorate the 18th c. naturalist Gilbert White. In 1957 it was registered as a site of Special Scientific Interest and the Society began an intensive management programme to restore its fragile habitat, which had suffered from neglect during and after World War II. 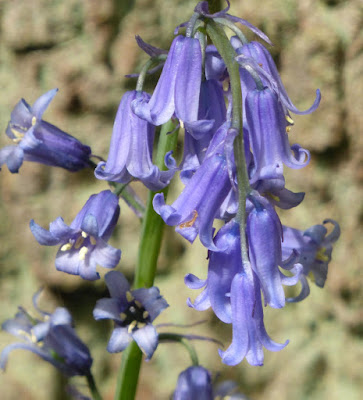 The bluebells are all English, with stems that curve over - if any upright Spanish ones appear, they are quickly removed. The wood is carefully managed. We saw signs of coppicing on the larger trees, such as this hazel (below) and a programme of planned felling is creating clearings where seedlings have a chance to develop and rejuvenate the forest. 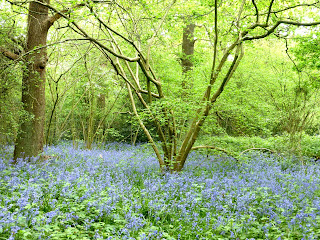 The first Open Day was held in 1970, initially in May, but now it's on the last Sunday in April as global warming means the bluebells are flowering earlier. The carpet of blue was actually just past its best this year, but the colour and scent from the flowers was still wonderful. 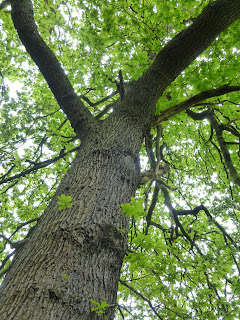 The reserve is also home to 24 species of trees, among them two oaks, at least 400 years old, and planted to mark the boundary between Perivale and Greenford (above). As well as the bluebells, there are banks of wild flowers, three ponds, two streams and glimpses of the Grand Union Canal that runs along part of the wood’s border. The Open Day is on the last Sunday of April. Entrance is £1, and no booking is necessary.
Posted by sandra at 23:04