Think of Van Gogh, and you probably picture him painting sunflowers or olive trees in the south of France, works full of colour and expressive brushwork. But this major exhibition at Tate Britain has a different starting point: the three years he spent in Britain before his painting career began. It explores the way he was influenced by British art, literature and culture, and in turn went on to inspire British artists, from Vanessa Bell to Francis Bacon.
There are plenty of his paintings to enjoy in this, the largest collection of his work shown in the UK for nearly a decade. Fifty of his works have been borrowed from around the world, chosen by the curators to illustrate this theme. They include Starry Night on the Rhone, 1888, with its similarities to paintings he had seen of the Thames and Embankment. In L’Arlésienne, 1890, he includes French translations of two books he loved and recommended to friends, Dickens’s Christmas Books and Harriet Beecher Stowe’s Uncle Tom’s Cabin.
Look at his humble pair of shoes (above), and then compare them to this painting of Miss Jekyll’s Gardening Boots done in 1920 by William Nicholson. Not quite so worn, perhaps, but still unmistakably working footwear.
Lovers of Sunflowers will be fascinated by the room devoted to this work, showing it alongside the many paintings by British artists that it inspired. 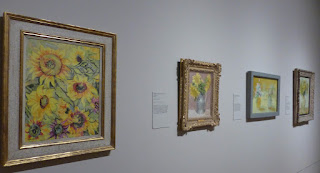 A bonus is that there are also many works from private collections, not so familiar. To be able to stand in front of them and experience the energy that radiates from each thick brush stroke, rather than seeing them in (sometimes not very good) reproductions, draws you closer to the creative experience. The exhibition traces the life of the young Van Gogh in England between 1873 and 1876, working as a trainee art dealer. He wrote to his brother Theo, ‘I love London’. He walked everywhere, saw paintings in art galleries and museums that he would remember all his life, and immersed himself in English literature. He was devoted to Charles Dickens, and later wrote, ‘My whole life is aimed at making the things from everyday life that Dickens describes’. Radical ideas thrived in Britain and encouraged his interest in popular religion and concern for the hardship of working people.
When he finally took up his brush, this remained with him. His subjects were not society figures, but workers, people he saw every day, such as Marie Ginoux (The Arlésienne), who ran the train station cafe in Arles.
The countryside that surrounded him also provided inspiration.
Included in the exhibition is his only painting of London. The Prison Courtyard is based on his personal copy of a print of Newgate Prison by Gustave Doré, and comes from the last year of his life - he had earlier written about a ‘prison’ of poverty and social prejudice that prevented him from being the artist he wanted to be.
Van Gogh sold only one work during his lifetime and it was not until twenty years after his death that British audiences had a chance to see what he had produced, in a 1910 exhibition entitled Manet and the Post Impressionists. It attracted 25,000 visitors, though not all were impressed - contemporary cartoons show audiences bewildered by the unfamiliar style of his paintings, though some, such as Sunflowers and Wheatfield with Crows, later became his most famous works. During WW2, many of his paintings were hidden to keep them safe and when, by 1947, they were out of hiding, the Tate staged a blockbuster show of his work that attracted record-breaking crowds, including royalty.
His dazzling colours cheered a war-torn society and the idea of Van Gogh as an artist of the people chimed with the post-war mood and ideals of art for all. A whole generation of young British artists also visited and were inspired by what they saw.
As the exhibition shows, his influence can be seen in works by painters such as Matthew Smith and Francis Bacon (above) and has continued through the decades. And now, in this digital age, it is reaching more people than ever before.
The EY Exhibition: Van Gogh and Britain is at Tate Britain until August 11 2019. Admission £22 (concessions available).
Posted by sandra at 20:55