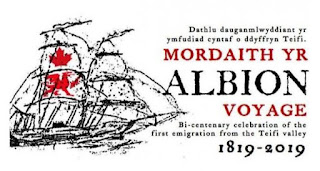 This Easter, the west Wales town of Cardigan is staging a series of events to mark the 200th anniversary of a mass migration that saw some 160 local people leave for British North America. There'd been a series of poor hardships, economic depression and unemployment was rife, and all were hoping to find a better life on the other side of the Atlantic. Among them was Elizabeth Bowing, daughter of the local Earl. She'd fallen in love with their gardener, David Saunders. had eloped and been disinherited. They and the rest of the group set sail on April 19, 1819 on the brig Albion and, having risked danger and death, 60 days later finally made landfall at St John, New Brunswick. While the young quickly found employment, it was a different story for some families who knew nothing but farming. With little or no money to buy land, they were reliant on help from the settlers already there, who were bemused by the strange language (most spoke Welsh) and the women's tall hats and shawls. Their first winter was very hard; cold and malnutrition claimed several lives. But they persevered, and were eventually granted land near Fredericton. By the 1830s the settlement they founded, a second Cardigan, was a thriving farming community, and descendants still live in this part of Canada. David and Elizabeth did well. Having been given land, he helped establish the Baptist church and one of his sons, Thomas, formed the first school.  New Brunswick will be celebrating the epic voyage on August 10 and 11. The Welsh events are being held for ten days over Easter.
Details at
https://www.facebook.com/Central-New-Brunswick-Welsh-Society
http://cardigan-maritime.com/community-pages/albion-bi-centenary.html
https://www.tivysideadvertiser.co.uk/news/17539429.cardigan-ready-to-celebrate-its-maritime-history/
Posted by sandra at 18:00