One of the first objects you see in this new exhibition at the British Library is a small limestone stele on which, 3,600 years ago, a scribe carved a hymn to the Egyptian god of the underworld, Osiris. It’s the Library’s oldest treasure, written in hieroglyphics, and although the hymn was known, this version is especially precious as it contains passages not recorded elsewhere. Today, just by tapping these words into a computer, I am following in the scribe’s footsteps, continuing a tradition that began some 5,000 years ago, in several different locations around the world. Mesopotamia, Egypt, China and the Americas all independently developed their own writing systems. These revolutionised society and are one of humankind’s greatest achievements. This limestone monument, more than two metres high, is covered in Maya hieroglyphs from Belize, and dates from 647 AD.
It's a fascination and thought-provoking exhibition, looking at the origins and evolution of writing - styles, materials, and  technology - as well as people’s relationships to it. More than 40 different systems are on show, ranging very early cuneiform on a clay tablet (listing offerings made to a Mesopotamian temple) to digital typefaces and emojis.
You can see how the alphabet developed, look at Britain’s earliest book, Caxton’s first printing of Chaucer’s The Canterbury Tales from 1476 (above), and wonder at a 2.44 metre-long papyrus scroll recording what must have been a very complex sale of property in Italy in 572 AD.
The many  items on display also include a Thai folding book, Chinese oracle bones, Burmese tattooing instruments and a 1905 petition signed by 60,000 people, protesting about the partition of Bengal.
Some of the objects were created for religious reasons, or to name or claim things. The inscription on this Ancient Egyptian figurine (above), designed to act on behalf of the deceased in the afterlife, reads: “Here I am, you will say, when called to work, cultivate fields, or irrigate the riverbanks”.
There are also some intriguing personal objects that resonate over the centuries. A wax tablet (above) shows how, almost 2000 years ago, a schoolchild struggled with his homework. His teacher had scratched two lines of Greek for him to copy. He does this twice, and each time makes mistakes, missing letters and running over the margin. Did he give up after that? Was he punished? We will never know. There’s also a quill pen used by the poet, Alfred Lord Tennyson, which he threw away after the nib got bent (perhaps damaged in the throes of inspiration?).  And a touching final entry to the diary kept by Robert Falcon Scott, written in the Antarctic when he knew his expedition was doomed: “For God’s sake, look after our people.” 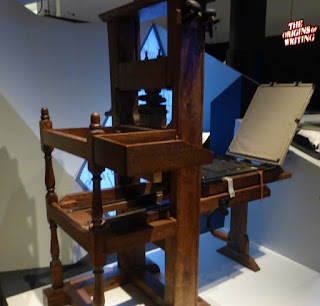 Printing presses not dissimilar from those of Caxton were used for hundreds of years; this reproduction of an 18th C one employs much the same technology. Today, we have more choices about how to communicate than ever before – pictures, videos, voice recordings, emails and text, and technology seems to be moving these on at an every-increasing rate. The exhibition ends with an interactive display and a question: How will we send birthday greetings in 50 years’ time? I left pondering that and wondering: would anything written today still be read in 3,600 years’ time?

Writing: Making Your Mark is at the British Library until August 27, 2019. Admission £14, concessions available, children 11 and under free.
https://www.bl.uk/whats-on
Posted by sandra at 16:21