The Great Fire of London exhibition

September 2 marks the 350th anniversary of the Great Fire of London. The fire raged through the city for four days, leaving some 100,000 people homeless. A new interactive display at the Museum of London explores the conflagration, and the effect it had on the capital.
The fire broke out in Thomas Farriner’s bakery in Pudding Lane in the early hours of the morning, and the exhibition starts with a recreation of the narrow street (above), showing how the closely-built wooden properties allowed the flames to spread quickly.
We then see the fire’s rapid progress as it spreads across a map of London (above), with displays of some of the objects excavated from the ruins – pottery, bricks, tiles, ceramics and glass. This ceramic roof tile (below) which should have been flat and terracotta in colour has been bent in half by temperatures over 1500'C.
There were no fire brigades at the time - neighbours were expected to work together using equipment stored in churches and the halls of City companies. Among the items on display are a bucket, firehook, and a star exhibit, the museum’s restored hand-pumped fire engine from the late 1670s (below). Recent trials have shown it wouldn’t have been very effective. It was the eventual use of firebreaks – blowing up houses in the path of the fire –  that finally halted its spread.

Eighty per cent of the City was consumed and the ruins smouldered for months. More than 13,000 houses, official buildings, St Paul’s Cathedral and 87 churches had gone up in smoke at a time when insurance didn’t exist. Shopkeepers lost their entire stock. In one display case is this hoard of 17th century glass, found under burn debris during excavations of a cellar on Gracechurch Street.
Many Londoners fled to makeshift tent encampments such as the one in Moorfields, and remained there for up to eight years, as arguments raged about how the City should be rebuilt and who would pay for it. The diarist, John Evelyn, who later submitted plans for a new city layout,  wrote: “The poor inhabitants dispersed...some under tents...others in miserable huts and hovels... now reduced to extremist misery and poverty.” King Charles II started a national fund to help them; more than £16,000 (about £2.4 million today) was given.
In the end, redesigning the City proved too complicated, and the old street pattern was mostly retained (above), with a few improvements, such as the use of brick rather than wood, and the banning of overhanging signs – in future, they were to be mounted flat on the wall, like this one from an inn, of a monkey eating an apple. Not everyone obeyed. 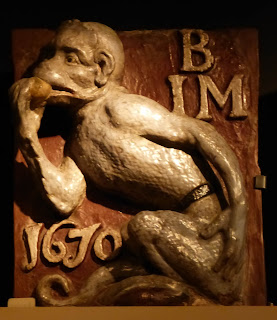 Public buildings were a priority and rebuilding started immediately on Newgate Prison and the Guildhall. The task took more than 40 years. The new St Paul’s, designed by Sir Christopher Wren, was not completed until 1711, and one of the last churches to be finished was St Michael Cornhill in 1722.
The fire was so devastating it made headlines in countries such as France, Germany, the Netherlands and Spain. Some of these reports are on display.  A Spanish account says: “It was one of the greatest fires of the kind that the world has ever known.”
The museum has made good use of its rich collection of objects related to the catastrophe. The atmospheric lighting echoes the fire’s progress, and with the school holidays just starting, the curators have strived to make the exhibition family-friendly, though with enough material – letters, diaries, etc  - for the more academic visitor.
Tickets from £8 online.
https://www.museumoflondon.org.uk/museum-london/whats-on/exhibitions/fire-fire