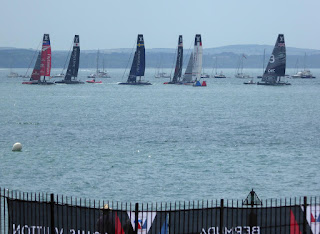 The Louis Vuitton America’s Cup World Series was being held in Portsmouth this weekend, with teams from Sweden, Japan, America, France, New Zealand and Great Britain competing to challenge the reigning champions – currently Oracle Team USA – in the final World Cup event in Bermuda next year.

Friday's crowds had the bonus of a spectacular aerial display by the Red Arrows. The skill of the pilots as they performed their breathtaking manoeuvres was matched by that of the crews of the AC45F catamarans as they fought to capture the advantage of every breath of wind in the Solent. 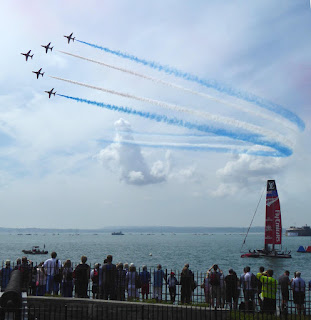 The America’s Cup started in 1851 as a 53-mile race around the Isle of Wight between a racing yacht built by the New York Yacht Club and a fleet of British yachts. The American schooner, the America, won, and that’s how the cup and the race got its name. America went on to hold the trophy for more than a hundred years, until in 1983 it was taken by an Australian team. In 1995 it went to New Zealand, who sucessfully fought off a challenge in 2000.  Switzerland won it in 2003 and again in 2007 but in 2010 it was taken back by America. 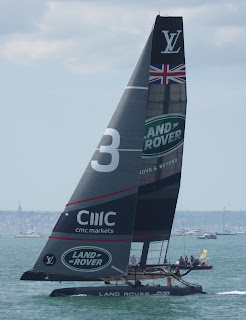 This time the British hopes rest with Land Rover BAR (above), under the expert eye of Sir Ben Ainslie. The next World Series event will take place in Toulon, France, in September. There will be one more World Series event in Fukuoka, Japan, in November before the Qualifiers and Challenger play-offs next summer in Bermuda. Will 2017 be the year the America's Cup comes back to Great Britain?
https://www.americascup.com/en/world-series-AC45.html
Posted by sandra at 23:31