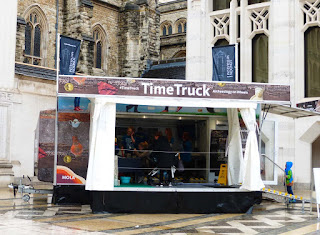 Making the Mithraeum, a pop-up exhibition in London's Guildhall courtyard on a very wet August afternoon, offered a glimpse of an exciting new museum of Roman life, opening in the City at the end of October. It will be under Bloomberg's new European headquarters between Queen Victoria St and Walbrook, and have at its heart the Roman Temple of Mithras, dating from 240 - 250 AD and uncovered in 1954 during excavations of a WW2 bomb site. The discovery caused a sensation with 80,000 people flocking to see it. Public demand led to the remains being lifted and eventually relocated nearby, where they remained until 2010 when the latest building project got underway and they had to go into storage. The development takes them back to their original setting, now seven metres below street level, and will see them reunited with the temple's foundations, recently uncovered. Because of the latest knowledge, the reconstruction will differ slightly from the earlier version. 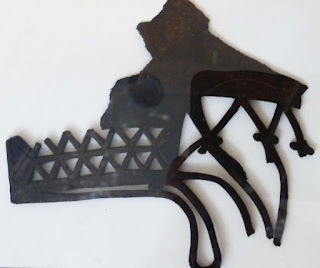 Surrounding it will be some of the 14,000 finds uncovered by the 50 archaeologists who worked on the Bloomberg site for eight months. The Walbrook stream once flowed past the temple, and the damp conditions were perfect for the preservation of wood, leather, metal and bone; some sandals with an intricate cut-out design (above) were uncovered and were on display in the Museum of London's Time Truck. 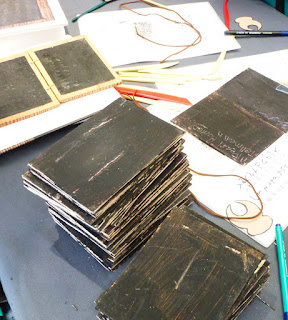 Visitors to Making the Mithraeum were also able to learn about the 405 Roman waxed writing tablets discovered in the mud and try writing themselves on modern alternatives (above). These finds are currently being deciphered and archaeologists say they "far exceed all expectations" and would allow them to get closer to the first Roman Britons.  (Previously, only 19 legible tablets were known from London.)  Among them is the earliest datable document discovered in Britain. It's basically an IOU, and goes back to Jan 8, 57 AD - the first decade of Roman rule. In translation it reads: "I, Tibullus, the freedman of Venustus, have written and say that I owe Gratus, the freedman of Spurius, 105 demarii from the price of merchandise which has been sold and delivered..." The new museum promises to offer visitors "an immersive experience bringing the bustling world of Roman Londinium to life by unlocking the stories behind the city's first Londoners." It sounds a far cry from the museum displays that were around when the Mithraeum was first discovered. But will we ever know if Gratus got his money back?
https://www.londonmithraeum.com/
Posted by sandra at 19:58