The Anglo-American artist, John Singer Sargent (1856 – 1925) was renowned as a painter of portraits in oils, some of which were featured in an exhibition at the National Portrait Gallery in 2015. But at the age of 51, he decided he'd had enough of the medium and his society clients. “Painting a portrait would be quite amusing if one were not forced to talk while working,” he confessed to a friend. “What a nuisance having to entertain the sitter and to look happy when one feels wretched.”

Financially secure, he escaped from the confines of his studio and began painting purely for pleasure using watercolours, which he’d enjoyed while young. These allowed him to record, rapidly, any scene that caught his eye. Some of the results (above) are almost abstract. He made annual trips to Italy, Spain, Corfu and the Middle East, often with family and friends, concentrating on subjects of his own choosing. 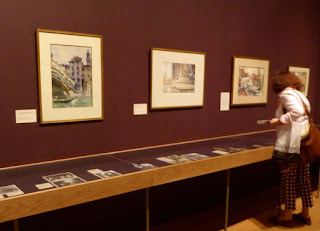 This exhibition at the Dulwich Picture Gallery contains 80 of these works from more than 30 lenders, dating from 1900 to 1918, as well as many personal photographs that add context to his output. It’s arranged thematically, grouping together landscapes, cities and people.
Interestingly, he rarely painted buildings as complete entities, but concentrated on segments, focusing on form and pattern. “Spanish Fountain” is closely cropped – the grandeur of the setting left mostly to the imagination.
Venice is captured from canal level, through a tangle of masts and rigging.
Another view includes two of his friends in a gondola. You can just see the prow of the one he is working from.
The exhibition ends with a selection of his figurative paintings, including one of his niece, Rose Marie, “The Lady with the Umbrella”. (Sadly, she later died in shelling in WW1, while nursing French soldiers in a church.) She lies back, relaxed, looking languidly at the viewer, her dress a free-flowing wash of pinks, greys and blues. It’s a portrait, but far removed from the formal ones of his earlier years and, as with most of the other paintings, sparkling with the effects of light and shade. His great nephew Richard Ormond, who co-curated this lovely show, says the pictures reveal Sargent’s zest for life and his pleasure in the art of painting. “The fluency and sensuality of his paint surfaces and his wonderful command of light never cease to astonish us. With this exhibition we hope to demonstrate Sargent’s mastery of the medium and the scale of his achievement.”

The exhibition runs until October 8, 2017. Admission £15.50 (concessions available)
http://www.dulwichpicturegallery.org.uk/
Posted by sandra at 15:40