Death in the Ice: the shocking story of Franklin's final expedition 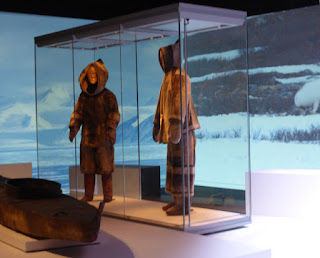 On one of the hottest days of the summer, I was in the National Maritime Museum in Greenwich, surrounded by images of snow, ice and polar bears. In front of me were Inuit figures swaddled in parkas, and the sound of an Arctic wind echoed through the gallery. It was a dramatic introduction to an exhibition about a mystery that transfixed the Victorian world.
In 1845 Sir John Franklin set sail from London with two ships, Erebus and Terror, and 128 crew members to find the fabled North-West Passage through the Arctic. They never returned. Polar explorers such as Franklin were national heroes and the expedition had fired the public’s imagination. When there was no news, mounting concern and a campaign by Lady Jane Franklin forced the government to offer a reward of £20,000 for information about the expedition or the crew.
Search parties found relics such as tin cans, snow goggles and cutlery, along with several bodies. There was speculation that the crew, their ships locked in the ice, had died from scurvy, starvation, lead poisoning from tin cans or even (though no-one wanted to believe it) cannibalism.  In 1859 a piece of paper discovered under a cairn at Victory Point recorded the date of Franklin’s death – 11 June, 1847 – and that the crew were abandoning the ships. But of the vessels themselves and the bodies of most of those who'd sailed on them there was no trace.
Despite her unrelenting efforts over the next thirty years (she herself funded seven missions to the Arctic) Lady Franklin went to her grave without knowing the details of her husband's fate. More than 100 years later, relics and human remains, overlooked by earlier searchers, were found but it wasn’t until 2014 that a team of underwater archaeologists from Parks Canada, focusing on local Inuit memories of a ship sinking off the southern coast of King William Island, found the wreck of HMS  Erebus in 10 metres of water.  Part of the upper deck had collapsed, but the hull was still in good condition and its bell intact.
The location was some distance from where it was reported to have been abandoned. How and why it came to rest there still puzzles experts. Did it drift in pack ice to the new location? Did crew members return to the ship and manage to sail it further south?
Then, last year, the team located HMS Terror to the south-west of King William Island. Robot submarines recorded it well preserved and with its steering wheel and decks still in place. Today the exploration continues  –  there are only two short windows a year when dives can take place. This exhibition tells the story of the tragic expedition through some 200 objects, some of which are back in the UK for the first time since 1845. This autumn marine archaeologist Marc Andre Bernier hopes to explore the Terror himself and discover more.
There are many questions waiting to be answered, and while the galleries present the facts that are known, visitors are left to draw their own conclusions. Tribute is paid to the Inuit, whose oral history is so detailed they also have precise accounts of an earlier encounter with an English explorer, Martin Frobisher, in 1578. (They were puzzled because his hat was not attached to his parka to keep out the cold.) Light is also shed on the men who went with Franklin, some of whom are remembered in photographs. The exhibition shows that, despite being marooned in the ice, life was not all boredom and hardship. Commander James Fitzjames, of the Erebus, recorded in his journal: “Goodsir is catching the most extraordinary animals in a net and is in ecstasies. Gore and Des Vaoux are over the side, poking with nets and long poles, with cigars in their mouths, and Osmer is laughing.” A playbill from another expedition advertises an evening entertainment, staged by the officers to amuse the crew. 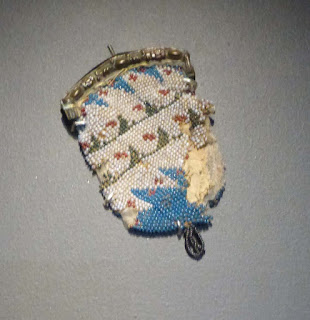 The objects on display include a pair of stylish boots, adapted for Arctic conditions by a seal fur lining. There's a beaded purse (above) - a treasured memento perhaps? - while willow pattern dinner plates hint at elegant dining. Some cutlery bears the family crest of Lieutenant James Fairholm, but we learn that on it are some roughly-scratched initials of another person, possibly seaman Cornelius Hickey, which raise more questions. Were officers’ possessions shared out after they died? Did law and order break down as death took those in authority? It's hoped that more paper records throwing  light on events may be discovered as the excavations continue. In the meantime, visit this intriguing  exhibition and step back into an age when the Arctic, not space, was the final frontier.
Until Jan 7, 2018. Admission £12 (concessions available).
www.rmg.co.uk/franklin