Matisse in the Studio

What inspires an artist? For Van Gogh, it ranged from sunflowers to the village of Auvers-sur-Oise, where his life ended. Constable loved Flatford Mill and the Suffolk countryside, Degas had his dancers while Cezanne painted Mont Sainte Victoire many times. Matisse, we discover in this Royal Academy exhibition, loved what might be called bric-a-brac - items mostly with little material worth, but which had caught his eye. This innovative presentation brings together thirty-five of the objects he owned, many not publicly seen outside France before, and pairs them with sixty-five of the works in which they appear. Matisse once described his collection as a ‘working library’, suggesting they functioned as a resource to which he regularly returned. He took them with him from studio to studio, rearranging and studying them. “These objects keep me company ..... I am not alone”, he wrote to his wife.
At the start of the exhibition is a simple blue Andalusian glass vase, bought in 1912. He painted it several times, (top) usually filled with flowers. In one painting on display, it is shown in a soft light that filters through the window and a lace curtain. In another, sharper light makes it seem heavier and more opaque. “A good actor can have a part in ten different plays; an object can play a role in ten different pictures,” he explained.
Perhaps the most famous ‘actor’ in his cast of treasured items was a wedding present, a silver pot for making chocolate. It is included in various still-lifes, occasionally even serving as a vase. The shape must have really appealed to him - he bought a second one and many years later featured it as a cutout in Still Life with a Shell.
The exhibition also explores Matisse’s fascination with African artefacts. In 1908 he bought his first African sculpture from a dealer in Paris. He showed it to Picasso, and later remarked that “it was then when Picasso noticed negro sculpture”. As he began acquiring masks, admiring their simplification and freedom of expression, his art took a new direction. On display is a series of five sculptures of a friend, Jeanette Vaderin, each progressively more abstract. An Italian woman, possibly a refugee, also captured his imagination. He painted her almost 50 times in less than a year, her mask-like features suggesting a detached, enigmatic presence.
Another section of the exhibition is entitled The Studio as Theatre. In 1910 Matisse travelled to Germany for an exhibition, Masterpieces of Mohammedan Art. It included tapestries, reliefs, metalwork and other decorative arts produced in the near East. He loved their intricate and colourful decoration, and was inspired to take trips to southern Spain and North Africa. Using the embellished fabrics and elaborate furniture he collected, he transformed his studio into a theatrical set.
The visitor can see the original perforated wall hanging, a ‘haiti’ (above) that, in a painting of an interior with his daughter, Marguerite and a model, becomes a Moorish screen.
In 1941, an operation for cancer left Matisse weak and mostly confined to his bed or a wheelchair. Unable to paint, he began experimenting with cut paper on a large scale. The shapes were fixed to the studio walls, having more in common with an installation or mural than an easel painting. His wife gave him a Chinese calligraphy panel for his 60th birthday and he was fascinated by the connection between form and meaning. Later, almost at the end of his career, he described his cut-outs as a summation of his life-long struggle to represent meaning in the least complicated way possible. The panel is featured in the exhibition’s final section, The Language of Signs, surrounded by cut-out elements. Looking at them, and the other items brought together for this illuminating exhibition, you really do see Cezanne’s mind at work. 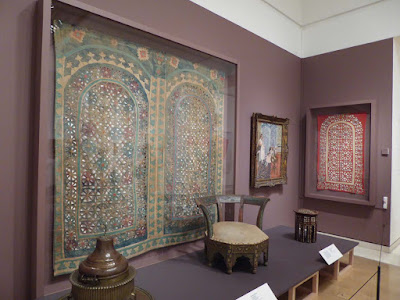