For more than a thousand years, this 18 ft tall statue of Hapy, Egyptian god of the annual Nile flood, lay broken and forgotten beneath the waters of Abukir Bay, on the northernmost coast of Egypt.

Now, restored to his former magnificence, he dominates the entrance of this fascinating exhibition at the British Museum – a fitting introduction to the story of how two ancient cities were rediscovered thanks to a dedicated team of underwater archaeologists.

While these sunken cities were known to have existed, their exact location was a mystery. Records contained three names – Canopus, Thonis and Heracleion - and it was these for which the director of the European Institute for Underwater Archaeology, Franck Goddio, was searching during a dive in 1999 when he spotted granite columns protruding from the seabed. Excavations got under way the following year and the remains of a huge temple dedicated to the Greco-Egyptian god Serapis were uncovered.  Goddio had found the lost city of Canopus. As the search continued, a further site was located, four miles off the present-day coast. There, as well as the statue of Hapy, a stele dating from 380BC (below) was found that clarified the mystery. Thonis and Heracleion were not different towns - Thonis was the older, Egyptian name for the city that the Greeks called Heracleion, in honour of Herakles (Hercules). 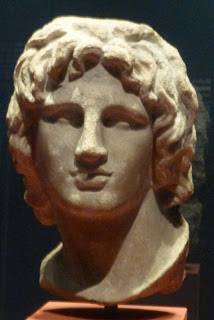 Thonis-Heracleion had been founded around 700 BC.  It became one of Egypt’s most important commercial centres for trade with the Mediterranean world - the remains of 69 ships and 700 anchors have been located - and, with Canopus, was a major centre for the worship of the Egyptian gods. When Alexander the Great (left)  conquered Egypt in 332 BC, he was careful to continue with the local ritual practices, including sacrifices to the royal bull, Apis, but maintained his Greek heritage.
As this exhibition shows, the growing links between Egypt and the outside world resulted in a complex society, with Greeks and Egyptians sharing politics, religious beliefs, languages and customs. Aspects of this fused culture were later exported across the Roman empire. (The exhibition has a useful table explaining the Egyptian and Greek/Roman names of the gods.)

But the cities had been built on unstable wetlands and a series of catastrophes caused them to sink into the sea, probably late in the 8th century AD. While the covering sand gave a measure of protection to the hidden treasures, it also hampered their removal - visibility on the seabed can be poor, and there are currents to contend with. The curators have recreated the eerie underwater atmosphere by darkening the exhibition space. Photos and videos show the finds as they were when first seen, with divers and fish circling around them. 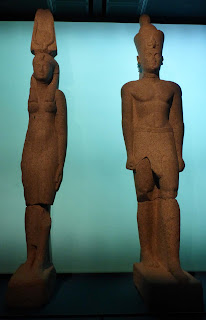 The objects on display are lit by dramatic spotlights. Two hundred of them are from the lost cities and include two colossal statues in pink granite of a king and queen (above) - probably from the reign of Ptolemy II, 283 – 246 BC and also a delicate sculpture of Arsinoe II, a Egyptian queen portrayed as the Greek goddess Aphrodite. There’s a bust of Neilos, god of the Nile, and a sculpture in a mixed Egyptian/Greek style of a queen dressed as Isis (below). 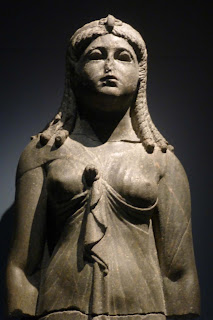 Known as the Dark Queen, she’s thought to be Cleopatra III (who married her much older uncle and was murdered by one of her sons). A video conveys the magic of the moment when a diver encountered her. 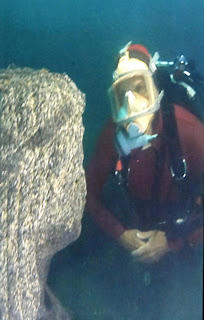 Many of the items are related to worship. A gold dish was probably used for pouring offerings and a series of model barges that at first glimpse could be toys (below) were most likely used in the secret annual rituals known as the Mysteries of Osiris, when the god was carried out on a sacred lake. The curators say these are extraordinary archaeological evidence of something that is otherwise known only through texts and images. 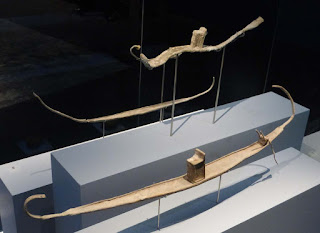 Among a further 100 objects drawn from collections in the British Museum and Egypt that complement the finds is a piece of jewellery in gold and lapis lazuli that belonged to the pharaoh Sheshonq I (943 – 922 BC).(below). It shows him sailing in a barge on primeval waters – a direct link to Osiris.


The two cities covered an area about the size of Paris. Goddio estimates that only about five per cent has been excavated so far, so there are many secrets yet to be revealed.

http://www.britishmuseum.org/whats_on/exhibitions/sunken_cities.aspx
Posted by sandra at 19:38