Real to Reel: A Century of War Movies

In the late summer and autumn of 1916, more than 20 million people flocked to cinemas across the United Kingdom to see the public information film, The Battle of the Somme.  Shot by just two cameramen, Geoffrey Mallins and J B McDowell, it marked a turning point in film making. The Secretary of State for War, Lord Kitchener, had previously banned all photography and film from the front but gave in to pressure from the film industry, which was aware of the public appetite for real footage. The flickering images of brave soldiers in the build-up and opening stages of the battle (above) brought home to audiences for the first time the horror of industrial warfare. Many went hoping to perhaps catch a brief glimpse of a loved one; the government gambled that they would leave with a determination to see the conflict through to the end, and that it would boost recruitment.
Short sequences from the 100-year-old film, which changed the way cinema and movies were perceived by society, open this new exhibition at London’s Imperial War Museum. It goes on to explore how film-makers have found inspiration in personal stories and real events from wars in the succeeding years with a combination of film clips, costumes, props, scripts, sketches and designs.
Among those featured is Violette Szabo (above), an undercover secret agent whose war work and eventual execution by the Nazis inspired the 1958 film, Carve her Name with Pride, starring Virginia McKenna. 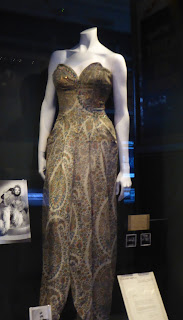 The exhibits are many and varied. They include an evening gown Marlene Dietrich wore while entertaining troops on USO tours (above), a robe given to Lawrence of Arabia, a chair that was a prop in Rick’s cafe in Casablanca, a replica motorcycle ridden by Steve McQueen in The Great Escape and a Santa hat worn by Jake Gyllenhaal in Jarhead.
Some of the scenes in The Battle of the Somme had to be recreated behind the lines and the exhibition spells out the difficulties of capturing combat on camera. Below, Sergeant George Laws, cine cameraman and photographer with No 5 Army Film and Photographic unit, before leaving the North West European Theatre in June 1945.


This being the movies, romance is not forgotten. The instrument played by Nicholas Cage in Captain Corelli’s mandolin (below) is there, symbolising the tentative love that burgeoned when the Italian forces occupied the Greek island of Cephalonia during WW2;  Casablanca’s haunting theme tune, “As Time Goes by”, echoes round the exhibition’s final section.


While The Battle of the Somme was primarily a propaganda film, those that followed have presented a wide range of perspectives on conflict, many of them controversial. The exhibition considers why so many directors and producers tackle the topic of war and goes on to explore the response to their movies. It ends with a montage of final scenes and endings drawn from films across the century, all evoking very different impressions: unsettling, bittersweet, tragic and triumphant. Among them is the final sequence of Richard Attenborough’s 1969 film, Oh! What a Lovely War. Its panning shot of an ever-expanding field of white crosses provides a visual shock to today’s viewer just as powerful as The Battle of the Somme’s footage from 1916. 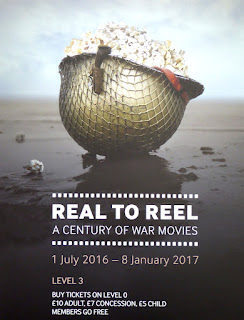