The Empress and the Gardener

The gardener in question is Lancelot “Capability” Brown,  born just 300 years ago. And the Empress? Catherine the Great of Russia. But this is not the tale of a romance between two people, but rather of the love each had for English-style landscapes, and of how Brown’s ideas were used to transform her gardens some 1300 miles away, on the far side of the Baltic sea.


The story has emerged thanks to the discovery of a series of beautiful and detailed drawings that show how the gardens of Hampton Court looked when under Brown’s care. They had lain forgotten in St Petersburg for more than two centuries, but are now back at the palace, and on display.

Brown was Chief Gardener to King George III from 1764 to 1783, and though he didn’t greatly change the palace’s grounds (out of respect, he said, for his predecessors) his fame for creating the newly-fashionable ‘naturalistic’ landscapes spread far and wide, capturing Catherine’s attention. She was a great admirer of all things English and wanted an ‘English Park’ for her palaces at Peterhof and Tsarskoe Selo. As far as is known, she never met Brown, but one of his disciples, James Meader, worked for her. It’s thought he negotiated the sale of two volumes of drawings of Hampton Court’s park and gardens by Brown’s draughtsman, John Spyers, who came from a local family of nurserymen but harboured ambitions to be an artist.  For these, she paid the huge sum of 1000 roubles - a tenth of the price of establishing her new gardens.  After the work was completed, the drawings disappeared into her collection at what is now the State Hermitage Museum but were recently found and identified by curator Mikhail Dedinkin, who’d seen some of Spyers’ work on a visit to London. He contacted Historic Royal Palaces and the result is the exhibition at Hampton Court that includes almost 70 of these sketches – the first time they’ve been seen outside Russia in 250 years. 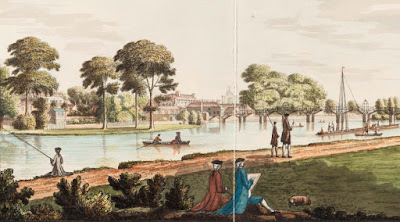 The Spyers views are a unique survival of how the estate looked in Georgian times – one of the most complete visual records of any historic landscape ever captured before the dawn of photography. There are yew trees (rather unkempt), lakes and fountains, the palace facade, people out strolling or boating, and even an artist sketching (Spyers perhaps?) The exhibition also features contemporary portraits of Brown and the Empress, and several drawings of Catherine’s ‘English Palace’ at Peterhof. The exhibition is included in the Palace entry ticket, and visitors can then step outside to see how much – or how little – has changed. (Below: a birdseye view of Home Park today.) 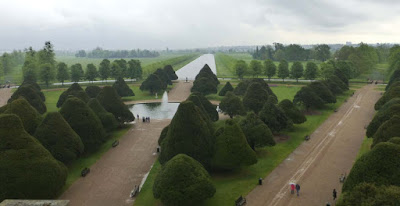 You can even take a carriage ride around the grounds. 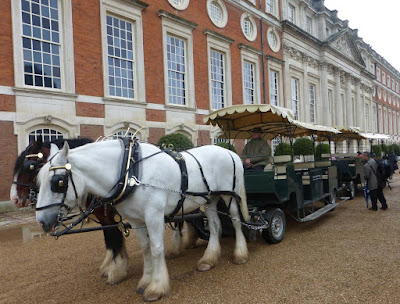 The Empress and the Gardener runs until Sept 4, 1016
http://www.hrp.org.uk/hampton-court-palace/visit-us/
Posted by sandra at 19:54