When George IV died in 1830, he was not widely mourned, thanks to his over-indulgence, womanising and extravagant spending at a time when the country was suffering from economic hardship and political turmoil. The Times obituary said “there was never an individual less regretted by his fellow creatures than this deceased King”. But there was another side to his character – that of a connoisseur with intellectual interests whose endless acquisitions made him one of the most important figures in the formation of the Royal Collection. This exhibition in the Queen's Gallery, Buckingham Palace (below) brings together more than 300 of the treasures he collected. 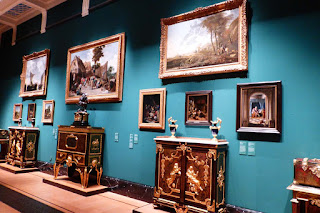 George was living at a time when upheavals on the Continent following the French Revolution flooded the market with works of art. Although he never travelled beyond Europe, he spent freely and frequently, indulging his passions for 18th-century French decorative arts, 17th-century Dutch and Flemish painters and of course Asian porcelain and oriental decorations, many of which found their way to the Royal Pavilion in Brighton. He transformed Windsor Castle and Buckingham Palace and was also among the patrons of British artists of the day such as Gainsborough, Joshua Reynolds, Thomas Lawrence and Richard Cosway. The Duke of Wellington described him as “the most munificent patron of the fine arts” and “the most accomplished man of his age”.
Among the many art works on display is his most expensive painting, Rembrandt’s The Shipbuilder and his Wife, which cost him 5,000 guineas. He also  managed to acquire a painting by Rubens of St George and the Dragon, which had belonged to Charles I but been sold off after his execution.
The exhibition also showcases the most spectacular moment of George’s life – his coronation, which came at a cost of more than £240,000. He orchestrated the whole event, overseeing the design of his sumptuous coronation robes and staging a banquet that featured the Grand Service, a 4,000-piece collection of dining and buffet silver-gilt that is still used today at state banquets.
Also on display is the glittering Diamond Diadem he commissioned for the occasion and wore in the procession to Westminster Abbey, atop a black velvet hat. It's remained a royal favourite, and appears in the image of Queen Elizabeth on postage stamps. She also wears it to the State Opening of Parliament.
Oposite the diadem is one of his most colourful coronation gifts – a red and yellow feather cape from the rulers of the Sandwich Islands (Hawaii). Sadly, they both died of measles not long after their arrival in England, but the cloak was still presented.

George was also a voracious reader. His tastes ranged from geography and military history to the works of Jane Austen – he had a set of her works in each of his homes. (Although not a great fan, she was persuaded to dedicate Emma to him.)
Many satirical prints and caricatures circulated during his lifetime, mocking his excesses in food, fashion and sex and surprisingly, he collected a number of them. One, The Great Joss and his Playthings, pokes fun at his interest in oriental style. Perhaps the most touching among the numerous portraits he comissioned of his family and friends is a delicate pencil and watercolour sketch by Richard Cosway of Maria Fitzherbert, “the wife of my heart and soul” whom he secretly married in 1785.
The wedding was illegal as his father had not given his consent. Later George was married to his cousin, Princess Caroline of Brunswick, but it was an acrimonious relationship and they soon separated, causing scandalous headlines. When he died in 1830 he was buried with a miniature portrait of Maria around his neck.

George IV: Art and Spectacle is at the Queen's Gallery, Buckingham Palace, until May 3 2020.
Details at www.rct.uk
Posted by sandra at 23:04