Inspired by the east: how the Islamic world influenced western art

Western artists have long been intrigued by the Islamic world. This sweeping new exhibition at the British Museum covers more than five centuries of artistic interaction, beginning with portraits such as this depiction of a Sultan and continuing through the tradition known as Orientalism to the present day. The earliest European interest in the Middle East was religious, focusing on pilgrimages to places mentioned in the Bible. Jerusalem was the most important, and was shown in great detail on a pull-out map in a book dating from 1486 that recounts the visit of a German knight to Palestine and Egypt. Diplomats established embassies, and there was much interest on both sides. One, in the Austrian service, wrote in 1581: “The Turks were quite as much astonished by our manner of dress as we at theirs.” Their presence provided work for both European and local artists, keen to portray the exchanges.
The exhibition has two fascinating paintings by Jean-Baptiste Vanmour, who arrived in Constantinople in 1699 and remained there for the rest of his life. In 1725 he recorded a procession and the subsequent dinner given by the Grand Vizier for a European delegation (above). (The ambassador, in a bright red coat, has his back to the viewer.) Other travellers stocked up on Ottoman artefacts, which were seen as exotic luxuries and much admired.
By the 1600s, Western craft workers were trying to imitate items such as this Iznik plate, but found it difficult to match the delicacy and vibrancy of colour of the originals. From the 19th c onwards, as travel became easier, goods were more available – some imported, others copied. They were displayed in homes and artists’ studios, which often included tiled “oriental” interiors. 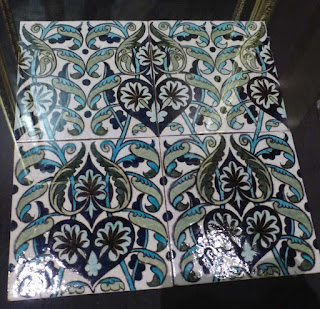 Among them was Leighton House in London, the home of the Victorian painter Lord Leighton, who commissioned these Islamic-style tiles from the British ceramicist, William de Morgan. But the real boom was in paintings.
Recurring images included famous sites such as the pyramids, glimpses of everyday life and religious devotions.
Some artists, such as John Frederick Lewis, donned “Middle Eastern” garb and included romantic self-images in their pictures. (His wife later left the colourful sash he wound around his head in this picture to the Victoria and Albert Museum, describing it as from Constantinople, and about 1000 years old. It was, however, both contemporary and Indian.)
Perhaps the most controversial aspect of Orientalism is its imaginary scenes of the harem, often used as an excuse to portray nude women. These had to be invented – harems were private, domestic spaces, and outsiders were not admitted.
One British artist, David Wilkie, was allowed to sketch a young Circassian woman in the harem of an exiled Persian prince, but he recorded she was fully dressed, with no expression, and silent – no titillation there. So the exhibition – perhaps because many of its items are from the Islamic Arts Museum Malaysia, where it will go on show next year – is rather short of the latter. The fascination with a highly fantasised Orient also found its way into books such as the Arabian Nights, and operas, films and even pantomines like Aida and Aladdin. To balance this, the exhibition has a section showing how some artists from the Islamic world turned the Orientalist gaze back on itself, with photographs and even maps, reusing such imagery for their own ends.
While interest in these arts and crafts has declined, the show concludes with four contemporary reactions to the imagery of Orientalism. Most striking is a self-portrait of artist Raeda Saadeh, reclining like an odalisque, but dressed in Palestinian newspapers, perhaps to draw attention to the Israeli-Palestinian conflict. All in all, an informative and visually arresting look at a cultural relationship that has endured for more than five hundred years.