When William Blake mounted his one and only independent exhibition of his paintings in 1809, in a room above his family’s hosiery shop in Soho, the critic Robert Hunt (brother of the more famous Leigh) wrote that the works were “the ebullitions of a distempered brain” and that Blake himself was “an unfortunate lunatic”. Not a single one was sold. 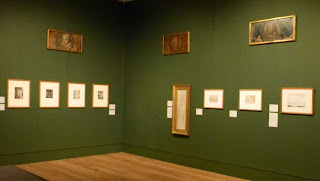 What a contrast with this new, sweeping show at Tate Britain which takes more than 300 of his images, lent from all over the world, and illustrates how he was a product of his tumultuous times, surrounded by revolution, war and radical politics. His artistic career began fairly conventionally, with drawing lessons, an apprenticeship as an engraver and enrolment as a student at the Royal Academy of Arts, where he was encouraged to copy antique sculptures and seek inspiration from Renaissance artists such as Michaelangelo and Raphael. But as the exhibition shows he soon rejected the rigid ideas being taught at the time and pursued a more personal vision.
It opens with his Albion Rose, c 1793, a visualisation of the founding of Britain, created in contrast to the commercialisation and austerity of the times, then follows his career through to his death in 1827, at the age of 69. He never earned much, but his engraving provided a basic income, and around 1788 he invented a new form of printmaking, ‘relief etching’. His exact methods are still unknown, but the process allowed him to print in colour and combine texts and images. He created a succession of visionary books which took in the most pressing moral and political questions of the day.  The exhibition curators point out that luckily few people saw these books, and the symbolism in them was obscure – if they’d come to the notice of the authorities, Blake might have been arrested because of their radical sentiments. 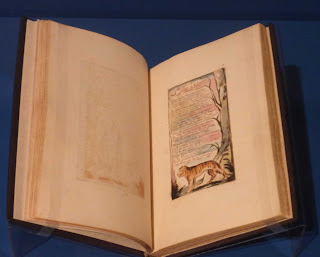 Some of these volumes – including Songs of Innocence and Experience – are displayed in cases, enabling visitors to get a close look at the intricate detail surrounding what are now among his best-known works, including The Tyger (above) and its sister poem, The Lamb. Throughout his life Blake depended on the support of family and friends, including his wife, Catherine, who hand-coloured some of the engravings. He had an ocasionally fractious relationship with his few loyal patrons. They admired his unconventional character and independent spirit but he resented being their employee and the advice they sometimes offered. The gallery shows the range of his work, including watercolour illustrations of the Bible, Shakespeare and John Milton.
Everywhere you are confronted with images which sprang from his vivid imagination – who else could have conjured up the Ghost of a Flea (inspired by a séance-induced vision) or Nebuchadnezzar, crawling along with terrified eyes? 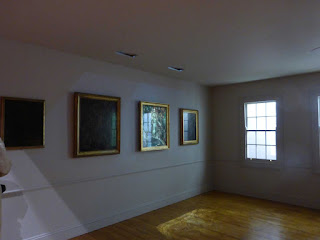 There’s also a recreation of that first exhibition (above), which was in a small, bare, dimly lit room. Blake, understandably, was bitterly disappointed at its failure, and withdrew from the public gaze for several years. But in 1818, encouraged by some younger and more business-savvy artists, he experienced a late burst of creativity. This produced his illustrations for Pilgrim’s Progress and the poem that has become almost a national anthem, Jerusalem.
He died while working on his final commission, illustrations for Dante’s Inferno, with Catherine, as ever, at his side. In 1957 a memorial to Blake and his wife was erected in Westminster Abbey.
The exhibition is being described as rediscovering Blake for the 21st century, and a once-in-a-generation event. (The last major showing of his works was at Tate Britain in 2000.) It may be another 20 years before his work is again displayed in such a comprehensive way.


William Blake is at Tate Britain until February 2, 2020. £18 (concessions available).
https://www.tate.org.uk/whats-on/tate-britain/exhibition/william-blake-artist
Posted by sandra at 14:46