Hambledon - the cradle of cricket 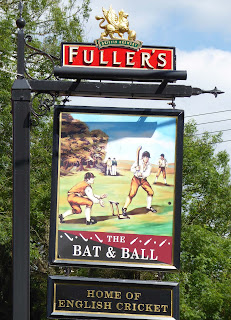 With cricket attracting so much attention this summer, it seemed right to visit the spiritual home of the game – Hambledon, in Hampshire, set in the South Downs National Park and surrounded by sweeping farmland and leafy woods. A form of cricket had been played on the Downs for many years, but in 1750 the Hambledon Cricket Club was founded and took responsibility for developing the laws of modern-day cricket, including the regulation of bat width and the addition of a third stump. 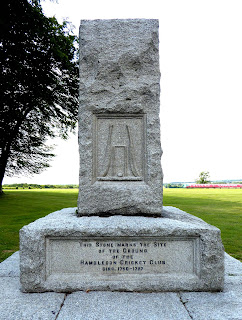 The game was initially played on the wide open space of Broadhalfpenny Down, originally the village's sheep common; we paused there to photograph the memorial stone that marks the spot. Meetings were held in the Bat and Ball pub opposite, where we had lunch, watching the many birds in the garden, including a woodpecker. 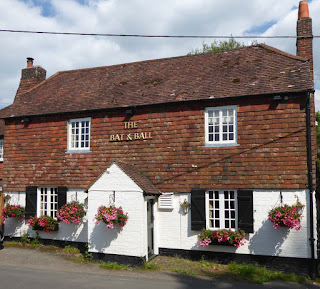 The historic building is packed with memorabilia, and worth exploring. I was intrigued by this  original bat that now graces a wall – it looks more like a hockey stick. 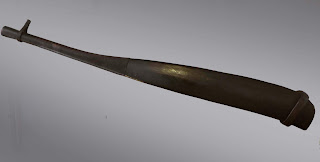 For aficionados, there's a set of rules printed in 1755. 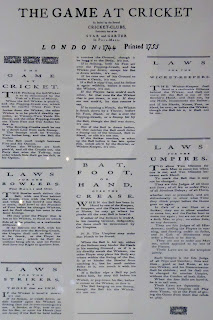 A very human touch caught my eye too: in 1756 a yellow and white spaniel, named Rover, went missing during a cricket match at Broadhalfpenny Down. He belonged to the local vicar, the Rev. Mr Keats, who must have been very upset as he posted a notice offering a reward for his return of five shillings, then two days' wages for a skilled tradesman! 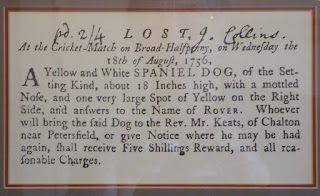 There's much about the pub’s landlord at the time, Richard Nyren, who was also ran the club. He went down in history for leading a team that played an All England XI on 51 occasions in the latter part of the18th c and defeated them 29 times. It's recorded he was left-handed both as a batsman and bowler. Interest in the sport grew and in 1787 the development of the game passed to a more central venue, the newly founded MCC (Marylebone Cricket Club) in London. Hambledon reverted to a village club, though its success has continued: its senior team reached the 1989 final of the national village knockout cup at Lord's. Hambledon Cricket Club is now based at Ridge Meadow, an idyllic cricket ground set amongst some of Hampshire’s prettiest countryside just to the west of Broadhalfpenny Down.
Posted by sandra at 12:55