“A ballgown is a dream, and it must make you a dream”.
So wrote Christian Dior in 1954. He loved designing clothes that could be worn at balls and fancy dress parties, transforming the wearer into a magical being. The grand finale of this exhibition at the V&A – the largest on the House of Dior ever to be staged in the UK – ends with a selection of extravagant evening outfits created by both the master and his successors, all shimmer and sparkle. Ranging from a strapless silk gown made for Margot Fonteyn in 1955 to the navy slip dress worn by Diana, Princess of Wales, to the Met gala held in Dior’s honour in 1996, they really are the stuff of dreams, far from the everyday world.
But, as is clear throughout the displays, Dior's genius had an enduring impact on day wear as well. He shook the fashion world in 1947 with his first collection, the New Look (as it was dubbed by a journalist). After the boxy, utilitarian clothes that were everywhere during World War II, this heralded a return to softness and romance, with rounded shoulders, wasp waists, and ballerina-length skirts using yards of material, despite fabric still being rationed. There was no going back. Women, accustomed to ‘make do and mend’ did their best to lengthen their skirts and nip in their waists while waiting for the restrictions to be lifted.
Dior, born in 1905, first visited Britain in 1926, and loved the country. “When an English woman is pretty, she is prettier than a woman of any nationality”, he wrote. His first UK fashion show was at the Savoy in April 1950, and Princess Margaret wore one of his designs for her 21st birthday four months later.
In his 10 years at the helm of his company, he launched 22 collections, each comprising over 150 looks. He reached out to the public with his own ready-to-wear line, and a wide range of accessories and fragrances, many of which are on show.
Fashion advice appeared under his name in magazines: “The greatest simplicity is always the best....” “Nothing is more elegant than a black sweater and skirt worn with a sparkling, many-stoned necklace.” And for the more mature woman: “Your neckline is very important. The V décolleté is most flattering as it makes you look thinner.”

A fascinating section of the exhibition is the Atelier, or workshop, where the original toiles - prototypes - of designs are on display. They’re made of white cotton, and carry markings showing the adjustments and alterations needed to turn the designer’s ideas into reality.
Dior inherited his mother Madeleine’s passion for gardens. “After women, flowers are the most divine creations,” he wrote. Flowers abound in his work – from single silk flower decorations to abundant prints and intricate embroideries. The designers who followed him after his untimely death in 1957 – Yves Saint Laurent, Marc Bohan, Gianfranco Ferré, John Galliano, Raf Simons and Maria Grazia Chiuri –  have carried on the tradition. 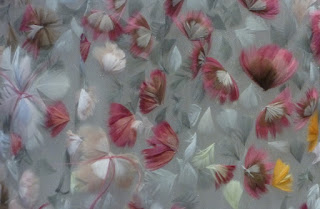 In one exquisite gown on display, Chiuri has used layers of cut and dyed feathers (above) to imitate flowers scattered across the bodice and skirt of a gown.
The exhibition has devoted a whole section to the work of those who took over Dior’s mantle. Says Oriole Cullen, the museum’s Fashion and Textiles Curator: “The influence of Christian Dior’s design was all-pervasive and helped to define an era. In their own individual ways, each of the House’s successive artistic directors have referenced and reinterpreted Dior’s own designs and continued the legacy of the founder, ensuring that the House of Christian Dior is at the forefront of fashion today.”
Christian Dior: Designer of Dreams is at the V&A Sainsbury Gallery, London SW7 2RL until 14 July 2019. Tickets £20 (concessions available).
Posted by sandra at 20:25