Reflections: Van Eyck and the Pre-Raphaelites


Van Eyck’s Arnolfini Portrait is one of the most famous paintings in the National Gallery in London, and this new exhibition shows how it inspired a generation of artists after it was first displayed there in 1842. Until then, few examples of Early Netherlandish painting had been seen in Britain, and van Eyck’s exquisite oil technique and luminous colours captivated the Victorian audience, among them the young artists studying at the Royal Academy in the Gallery’s East Wing. Disenchanted with the contemporary academic approach to painting, they founded the Pre-Raphaelite Brotherhood and began painting with the clarity and precision they admired in van Eyck. In this exhibition, the Arnolfini Portrait takes centre stage, hung at eye level and without the barriers that normally keep the public at a distance.
Works by Pre-Raphaelites and their successors are in the surrounding rooms, shedding light on the different ways these young artists responded to the painting and one of its most distinctive features, the convex mirror at its centre. They adopted this device as a means of exploring ideas of distortion and reflection, but also as a way of conveying complex psychological drama.
In William Holman Hunt’s The Awakening Conscience, which depicts a woman and her lover, the mirror, this time rectangular, reflects a view out of the window, alluding to the woman’s possible redemption from a life of shame.
Other motifs from the Arnolfini portrait appropriated by the Pre-Raphaelites include a pair of pointed slippers and a silver samovar topped with candles in Hunt’s The Lady of Shalott (above) and the hanging bed drapery, carpet, dog and oranges in William Morris’s La Belle Iseult.
By 1860 the orginal Pre-Raphaelite Brotherhood had disbanded as the artists began to diversify their interests. However, van Eyck's convex mirror remained an important source of inspiration for the next generation of artists, such as William Orpen (below).
As well as highlighting links that might not have been immediately obvious, the exhibition is imaginatively designed so that everywhere there are mirrors to reflect both paintings and visitors. 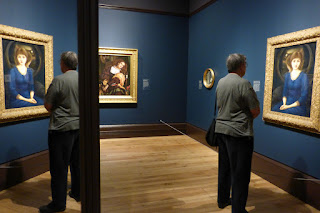 There's even a convex mirror owned by Dante Gabriel Rossetti, which featured in many of his paintings. It is one of several that adorned his house at Chelsea. His studio assistant, Henry Treffry Dunn recalled: "..whichever way I gazed, I saw myself looking at myself".
Reflections: Van Eyck and the Pre-Raphaelites runs until 2 April 2018. Tickets from £8.
http://www.nationalgallery.org.uk/whats-on