Drawn in Colour - Degas from the Burrell

This gorgeous (and free) exhibition at the National Gallery in London coincides with the centenary of the death of Edgar Degas (1834 – 1917).  A loan from the Burrell Collection in Glasgow, it’s the first time most of these works have been seen outside that city since they were acquired at the beginning of the 20th c by the shipping magnate, Sir William Burrell. The three sections – Modern Life, Dancers and Private Worlds – explore the artist’s skills and innovations, along with the historical and personal contexts in which the works were created, and leave you with a richer understanding of his talent.
Although Degas’s art training had followed a traditional path, he soon moved away from the usual subjects and technical conventions and took inspiration from the fast-changing world around him. He returned continually to a handful of subjects – dancers, horseracing, and women bathing – experimenting with materials and techniques. This exhibition gives fascinating insights into the way he worked.
While the scenes look as if they’ve been drawn directly from life, with unusual angles and abrupt cut-offs, they are in fact the result of careful and painstaking composition. He would make individual studies, then assemble them, moving them around until be achieved the balance he wanted. In After the Bath, Woman drying herself (above), you can see how extra sheets were added to enlarge the picture.
Degas made countless sketches for future reference. This woman looking directly with you through her field glasses was intended for a larger racetrack picture, her challenging attitude a complete contrast to most depictions of women at that time. 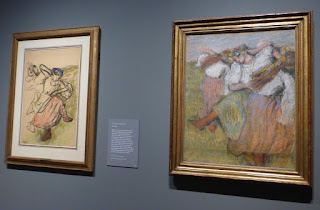 Degas was an avid ballet-goer. In one year alone, 1885, he is recorded as having attended 54 performances at the Paris Opera, which had its own corps de ballet and was close to his studio. He often portrayed the dancers, not as the audience saw them, but behind the scenes, rehearsing, holding an aching back or foot, waiting to go on stage. Pastels were his medium of choice: those on display  reveal how his technique evolved, the carefully blended layers of his early works giving way to a dense build-ups of bold, fluorescent cross-hatchings and bright highlights. When talking about his Russian Dancers (above, with a mirror-image preliminary sketch) Degas described these as “orgies of colour”.
With age, his eyesight failing, the exhibition relates how he increased his sculpture output. In the final room, showing women at their toilettes, seemingly unaware of being watched, there is a bronze of a naked dancer in an arabesque pose, her back a physical echo of a painted figure on the wall nearby. The figure was modelled with wax and cast only posthumously. Degas said such pieces were made “for my own satisfaction... to give my paintings and drawings greater expression, greater ardour and more life”.
Drawn in Colour: Degas from the Burrell, National Gallery, London, to May 7 2018. Free.
Posted by sandra at 15:56