Historic ships on the Thames 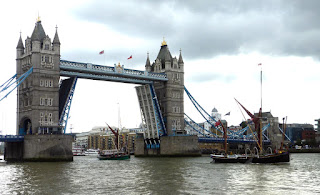 This month's Totally Thames Festival brought an awesome range of historic ships to the heart of London. On Saturday, September 16, Tower Bridge opened to allow a flotilla of traditional Thames barges to pass through. 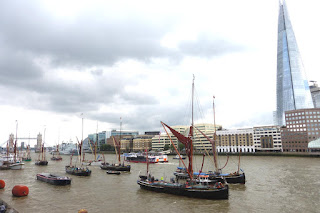 Crowds lined the banks to watch as the past met the present. 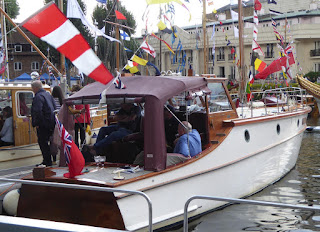 A few days earlier, in nearby St Katherine's Dock, there was a reunion of some of the Little Ships that had been part of the heroic operation to rescue trapped troops from the beaches of Dunkirk back in 1940. Their efforts were dramatised in the recent film, Dunkirk, and one of the ships in the dock, the Elvin (above), was actually used in the film. 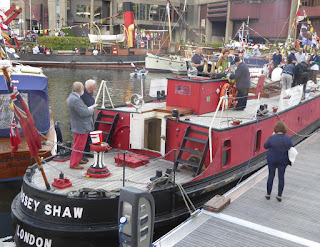 These survivors of an epic chapter in warfare have their own, fascinating, histories. The Massey Shaw (above) made three trips from Ramsgate to Dunkirk with a volunteer crew, bringing back 110 troops and ferrying a further 500 out to larger ships offshore. During the Blitz she helped save St Paul's Cathedral by pumping water from the Thames to fight the fires that were raging. She was decommissioned in 1971 and deteriorated until discovered at St Katherine's Dock by a fireman who had been on her at Dunkirk. A trust was formed and she returned to full working order in 2012/13. 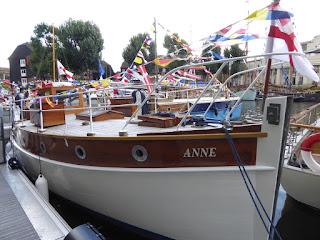 The Anne (above), built in 1925, suffered considerable damage during and after Operation Dynamo, and developed rot. She changed hands several times. A restoration in the 1970s meant she was able to take part in the 70th anniversary return of the Little Ships in 2010 and is now back with the family of her original owner, Percy Derby, after being spotted for sale on eBay by his great-grandson. The latest restoration reflects her original condition, though with the addition of a wheelhouse. 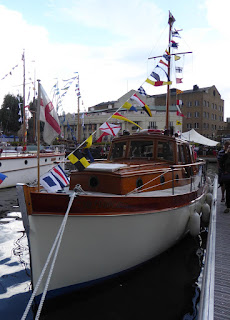 The Hilfranor was attacked by German dive bombers during the evacuation and abandoned on the coast of France. The story has it that two French soldiers, desperate to escape, baled her out and got the engine going. They made it as far as the Goodwin Sands, where she sank again, but was spotted by a British minesweeper and towed into Ramsgate. Repaired, she stayed in service for the rest of the war, used as an auxiliary patrol vessel and by the Fire Service. 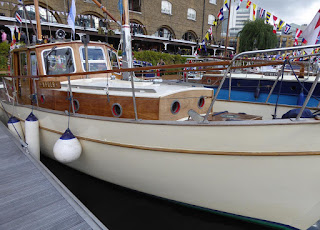 The Betty, now the Nuala, was requisitioned from the Thames and went across to Dunkirk. She was later fitted with an Oerlikon gun on her foredeck and served as a patrol vessel along the east coast of England. After the war she returned to civilian life and her name was changed to Nimrod, and later to Nuala. Her owners had no idea of her Dunkirk provenance until papers were released by the Admiralty in 1985. 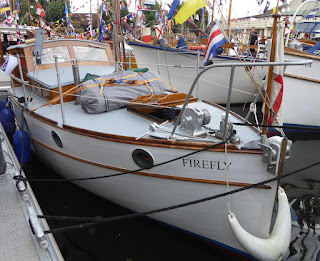 The Firefly, built in 1923, was one of three vessels of that name that took part in the evacuation and, at just 26 ft long, among the tiniest. In 1995 a Dunkirk veteran, Dennis Kinnel, told the then owner the story of how he'd been rescued by the Firefly after swimming out to her, pulling a seriously-injured comrade. She was, he said, the ship that probably saved his life. 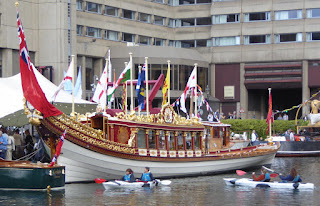 Also on show at St Katherine's Dock and attracting much attention was another, instantly recognisable boat - the Queen's rowbarge, Gloriana. A lasting legacy of the Queen's Diamond Jubilee in 2012, she is now managed by a charitable trust to promote better use of the Thames.
The Totally Thames Festival runs until the end of September. Details and events at:
http://totallythames.org/
Posted by sandra at 16:51