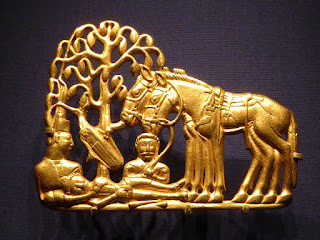 Two and a half thousand years ago, bands of fearsome horse-riding warriors roamed across a homeland that stretched from southern Russia and the Black Sea to China. They were masters of mounted warfare, with deadly bows and pointed battle axes. Their encounters with the Greeks, Assyrians and Persians were recorded by ancient historians but they themselves had no written language and built no cities, so for centuries all trace of their culture was lost. It was not until the discovery of ancient tombs, buried in the frozen ground and containing a wealth of Scythian treasures like this gold buckle (above), that the truth about their lives was revealed. 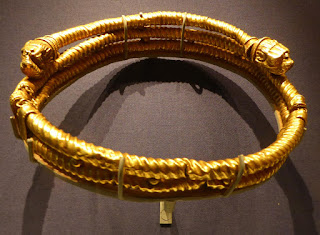 Some of the objects, like this torc with lion-head terminals, on loan from the State Hermitage Museum in St Petersburg, were uncovered during scientific expeditions sent to southern Siberia in the 1720s by Peter the Great; others were found quite recently in large burial mounds in the Pazyryk valley of the High Altai mountain region of southern Siberia. Excavations are ongoing, and, as this fascinating exhibition at the British Museum in London shows, continue to reveal more insights into a lost world. 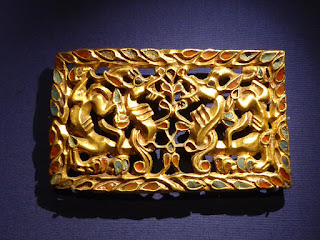 The displays begin with the treasures brought back to the Czar. Buried so as to accompany their owners into the afterlife, they are stunning - intricately decorated with real and imaginary creatures like these dragons (above). For the Scythians, constantly on the move, these burials are their monuments. They contain not just bling, but everything needed for life after death, including cooking pots and food. There are even some lumps of cheese on display. Found in a decorated bag, thanks to the permafrost they look dairy-fresh despite being well past their use-by date. 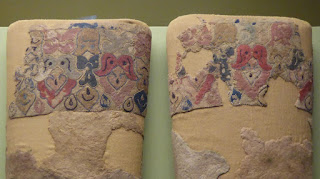 Also well-preserved are these women's felt stockings, beautifully embroidered and discovered in one of the Pazyryk burial mounds. 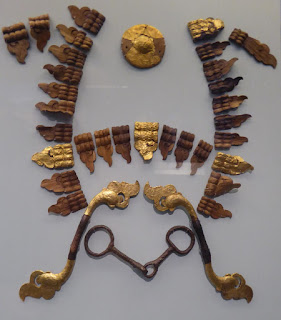 The lifestyle of the Scythians depended on horses, and they took their favourite ones with them to the grave. These were buried with elaborate bridles (above), saddle pendants, covers for the mane and tail and even masks (below), perhaps to ensure they were reborn as some kind of mythical super-beast. 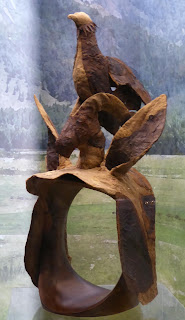 Life in the Siberian landscape was tough and there was heavy competition for survival, with tribes fighting against each other. The Scythians developed a fearsome set of weapons. The exhibition includes the mummified head of a tribal chief who was killed in battle, seemingly by the three battle-axe blows to the head. (His skin bears tatoos of fearsome beasts designed to protect him.)

Weapons were highly prized by their owners - this gold scabbard, found in a tomb in the north-west Caucasus and dating from the 7th c BC, is decorated with lions and winged bulls. When united, the tribes were a continuous threat to the Persian empire and according to the Greek historian, Herodotus, they defeated King Darius and his powerful army in about 513 BC. 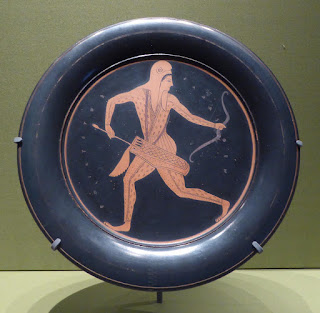 The archers were known to the Greeks; at one point some served as city police in Athens. This decorated Athenian plate from around 500 BC shows an archer running while looking back and  pulling an arrow from his quiver. 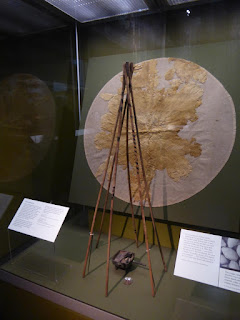 Life was not all battles however - they knew how to enjoy themselves. Among the finds on display is a hemp-smoking kit - Herodotus said the fumes made the Scythians 'howl with delight' as they inhaled them, and that it was also employed in cleansing rituals and for pain relief. And while sitting relaxing in their tents, drinking fermented mare's milk or imported Greek wine, it's tempting to imagine them listening to tales of past exploits and heroes. 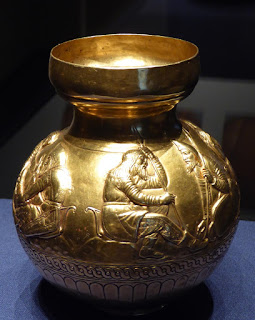 One of these has come down to us from Herodotus - the story of how Scythes, the son of Heracles, became ruler of the Scythians after managing to string his father's bow. This beautiful bowl shows Heracles either setting up the test or concluding the tale. The Scythians outlasted the Persian empire, and there was some cultural interaction between them and their settled neighbours, but in about the second century BC they disappeared and were replaced by other nomadic powers. Now, however, the centuries of oblivion that followed are over, and their lives and achievements are being rediscovered.  A British Museum blog even suggests that George R.R.Martin may have had them in mind when he created the bloodthirsty, horseriding Dothraki in Game of Thrones.
The BP exhibition, Scythians: warriors of ancient Siberia, is at the British Museum until January 14, 2018. Admission £16.50 (concessions available).
www.britishmuseum.org