Michelangelo and Sebastiano at the National Gallery, London 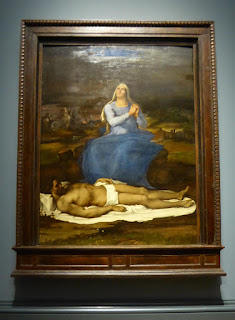 This intriguing exhibition explores the creative partnership between two artists, the superstar Michelangelo and his protégé, Sebastiano, and gives an insight into their complementary talents and divergent personalities. There are some seventy items on display – paintings, drawings, sculptures and letters. Their friendship lasted more than 25 years, which was surprising in itself (Michelangelo was notoriously difficult to get on with)  but owes much to the fact that for most of that time they were in different cities, Michelangelo in Florence and Sebastiano in Rome. A key factor in this partnership was their intense rivalry with another key Renaissance painter, Raphael, whom Michelangelo hated. While Michelangelo preferred painting egg tempura on wet plaster, Sebastiano and Raphael excelled at oils and the latter rapidly became a Vatican favourite, landing the plum jobs. So Michelangelo did his best to help Sebastiano, generously providing drawings and designs for some of his major works. A key painting in the exhibition, the Lamentation over the Dead Christ, on loan from the Hermitage (above), is their first collaboration, and the first large-scale nocturnal landscape in history. Michelangelo did many sketches (some of his work can be seen on the back of the wooden panel) and Sebastiano translated them into a monumental altar-piece. This met with widespread praise, and as a result, Sebastiano was given two major commissions, the Borgherini Chapel and The Raising of Lazarus, both of which were completed with Michelangelo’s help. 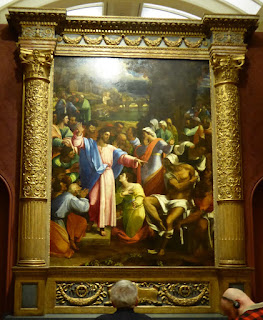 Recent scientific research on The Raising of Lazarus (above) – the gallery’s first acquisition in 1824 – has revealed that Michelangelo was quite hands-on, intervened at a relatively advanced stage to revise the figure of Lazarus so his right arm is drawn back across his body, rather than reaching towards the outstretched hand of Christ, and thus increasing the dynamism. 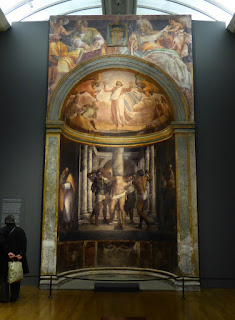 The spectacular Borgherini Chapel has been recreated for the exhibition in near lifesize form with digital imaging. It's an impressive achievement, and is surrounded by preliminary sketches for the project. Michelangelo did the premilinary drawings for the central Flagellation of Christ before he left for Florence and possibly a layout for the half-dome Transfiguration, while Sebastiano completed the decoration on his own between 1519 and 1524. Below, Sebastiano's cartoon for the head of St James Major. 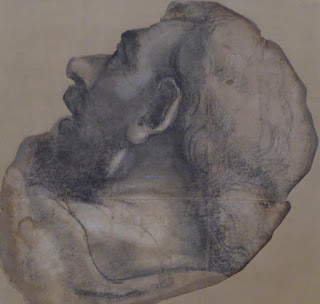 The letters that flowed between the two show how they helped each other. Sebastiano begs his ‘dearest compare’ (who was godfather to his first child) to ‘remember me...and recommend me to the most reverend Monsignor (Cardinal Guilio de’ Medici); and if I’m any good at this work, please let me carry it out...’. Michelangelo does his best: ‘I beg your Most Reverend Lordship... to obtain Sebastiano Veneziano, the painter, some share in the work at the Palace... as I’m sure he will do credit to Your Lordship’. Sebastiano also reports that Pope Leo X praised Michelangelo’s work but told him he was ‘terribile’ (daunting, awful) and that ‘one could not deal with him’. He goes on: ‘And I replied to His Holiness that your terribile character did not harm anyone, and that you appear terribile for love of the great works you carry out.’ 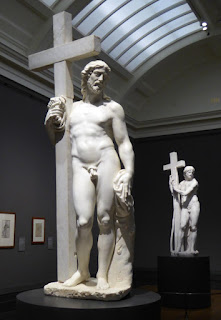 Among Michelangelo’s great works on display are two versions of the Risen Christ, both from Italy. The first was abandoned when a dark streak in the marble emerged. It was later finished by an unknown hand and found a home in the Church of San Vincenzo Martire.  Behind it is a plaster cast of his second, successful, version, which never leaves the S. Maria sopra Minerva. It’s the first time these statues have been seen together. 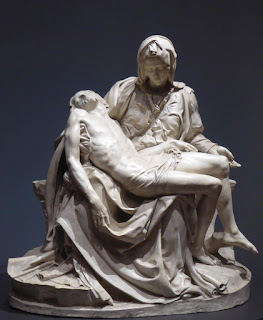 A cast of another of his masterpieces, the Pieta, is also on display and can be seen from all angles, unlike the original, now behind glass in the Vatican. 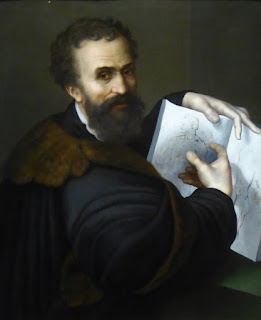 Towards the end of the show is a portrait of Michelangelo, believed to be by Sebastiano. He’s looking round, smiling and relaxed, as he invites us to look at his sketchbook. It’s a very different view of a man usually regarded as a tortured genius, and the curator, Matthias Wivel, is to be congratulated for the way the exhibition sheds light on another side of his character and introduces us to the tensions and rivalry of Renaissance art.
At the National Gallery, London, until June 25. Admission charge.
Posted by sandra at 18:00