Glorious Years: French Calendars from Louis XIV to the Revolution, at Waddesdon Manor 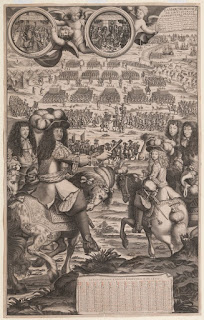 Where would we be without a calendar? They’re an essential part of our busy lives, helping with planning and reminding us about holidays, outings and engagements. But they’re not a modern phenomenon – back in 17c France, they were hanging on the walls of upper and middle-class homes in and around Paris, alerting people to events such as royal birthdays, weddings and anniversaries. More usually called almanacs, they reached their golden years under Louis XIV, who cannily used them as a propaganda tool to shape his image, with illustrations glorifying his family and regime and highlighting his country’s victories and peace treaties. (France was at war for most of his reign.) But because, like ours, they were taken down at the end of the year, few have survived. This makes the new exhibition at Waddesdon Manor all the more special. 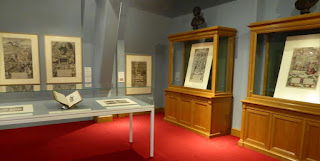 The house’s original owner, Baron Ferdinand de Rothschild (1839 – 1898) was fascinated by social history and managed to collect some 70 such almanacs, 26 of which are on show for the first time. All are exquisitely drawn, with writing so tiny that magnifying glasses are provided for close scrutiny. The earliest dates from 1656, two years after the coronation of Louis XIV, and shows the king triumphant. In a later one (top), he is on horseback, presenting his troops to the viewer as an example of French military might. 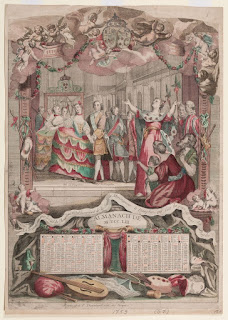 Others celebrate subjects such as his son’s recovery from smallpox (above) and the coronation of Louis XV in 1723. As well as wall calendars, there are some pocketbook almanacs. These range from official directories, listing members of the royal households, schedules for the postal service and carriage travel to collections of songs, poems and illustrations. Some even have erasable pages for note-taking and recording gambling gains and losses – the PDAs of yesteryear. 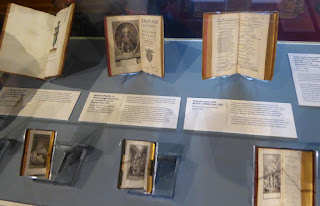 Most of the calendars took two months to design and execute and went on sale in December. (In contrast, Louis XV’s souvenir coronation book was such an elaborate undertaking it took nine years to prepare.) Not surprisingly, there was a surge in calendar production after the French Revolution of 1789, when the monarchy was abolished and the royal family lost their heads.Time was reinvented with the new Republican calendar, which removed all royalist and religious connections and looked to the natural world for inspiration. Instead of honouring saints, each day was named after an aspect of agricultural life, such as the day of chicory on 23rd Frimaire (November). The 12 months were divided into weeks of ten days, with the extra 5 days collected together at the end of the year. Printed almanacs were essential to ensure that people were getting the message. 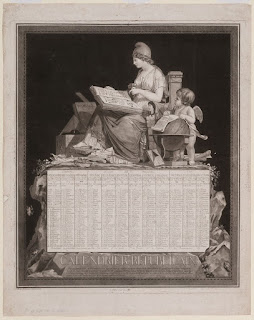 This calendar for 1794 by Philibert Louis Debucourt shows the figure of Philosophy seated on a marble throne, recording the principles of the new calendar in the book of nature. The text along the bottom describes the objects at her feet, including the abandoned Gregorian calendar, as ' the gothic monuments of error and superstition on which the ignorant and ridiculous division of time was founded.' However, the change brought problems with business and foreign trade, and when Napoleon Bonaparte became emperor, he brought back the Gregorian calendar. 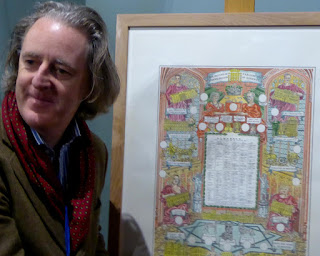 The exhibition has one modern calendar. British artist Adam Dant (above) was commissioned to create a 21st century almanac inspired by those on show. The Mother of Parliaments: Annual Division of Revenue satirises modern British MPs by using them as replacements for the French kings and their attributes. Instead of the traditional saints’ days of the old almanacs, the birthdays of the  Honorable Members are listed (should you wish to send a card) and blank spaces are left left to take  details of the year’s budget. Look carefully and you’ll find Harry Potter, lurking near the Department for Education. 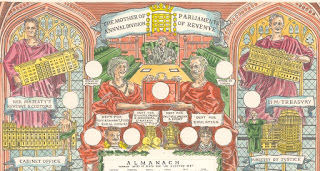