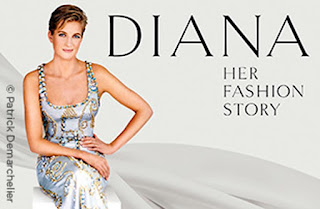 It’s hard to believe that 2017 brings the 20th anniversary of the death of Diana, Princess of Wales –  one of the most photographed women in history, whose fashion choices were copied by millions. This exhibition at London's Kensington Palace – her home for many years – is a celebration of her life, charting the transformation from fresh-faced teenager fond of frilly collars to international star in a bejewelled Versace gown. 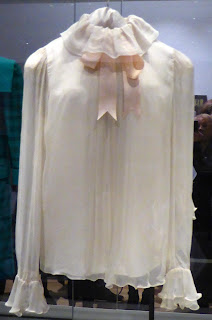 From the moment the engagement of Lady Diana Spencer to the Prince of Wales was announced in February 1981 (she wore this blouse for her engagement portrait), there was a huge demand for news about her. Magazines that featured her on the cover could increase circulation by 40%. 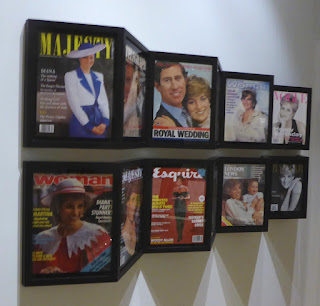 The pressure was intense, but she quickly learned the unwritten rules of royal and diplomatic dressing. As she explained in 1985: “You’d be amazed by what one has to worry about, from obvious things like the wind... and you’ve got to put your arm up to get some flowers, so you can’t have something too revealing and you can’t have hems too short.” 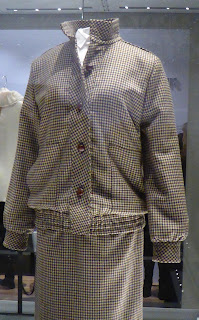 On her honeymoon in Scotland Diana wore this brown tweed wool day-suit, a very traditional English country outfit that she had made in two versions – one with extra shoulder room that allowed her to take part in activities such as shooting.  As she gained in confidence she began experimenting with different looks and learnt from her mistakes. Pie crust collars were out – ruffles didn’t photograph so well. 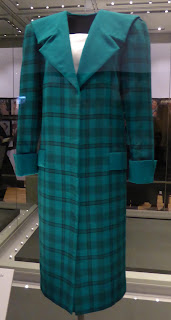 This tartan wool day-suit was for an official visit to Italy in 1985, and although the boxy shape was fashionable, it swamped her and was criticised by the press. It was never seen again. 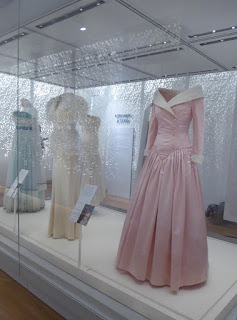 She learned which clothes worked for different occasions. When she posed for an official 1987 official portrait, she needed something strong that would hold its own next to Prince Charles’ ceremonial uniform, and Catherine Walker devised this stately pink satin gown, sometimes dubbed the ‘Disney Princess’ dress. Diana quickly became, according to designer Caroline Charles, “the best ambassador for British fashion”. 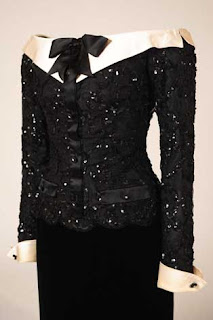 The Princess was not afraid to bend the rules. The tuxedo style of this cocktail dress by Bellville Sassoon was an unusual choice for a princess, and in royal circles, black was usually reserved for mourning – but the result was stunning. 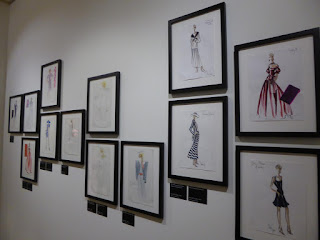 Diana developed close relationships with fashion designers, who would prepare sketches for her to review. Together they would finalise the look, and she often made notes on the sketches, suggesting changes or commenting on details she particularly liked. A selection of these is on display.. 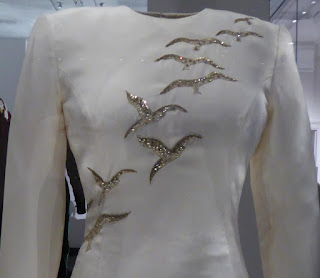 The exhibition includes many dresses worn on high-profile engagements around the world. This cream silk crepe Catherine Walker gown was created for an official visit to Saudi Arabia in 1986. It’s embellished with the national bird, the falcon, and the long sleeves and high neckline respect local customs. 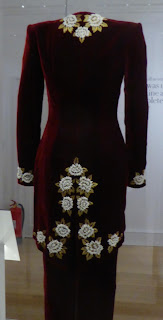 Diana was aware she would be photographed from all angles, so her outfits often had back interest, such as the embroidery on this burgundy silk velvet evening dress by Catherine Walker (1990). 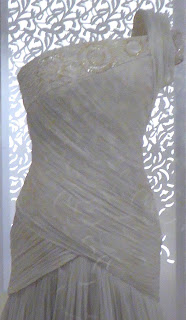 Many of her dresses were asymmetrical such as this sari-inspired chiffon dress, worn to a ballet performance in Rio de Janeiro in 1991. (On the same trip to Brazil she famously shook hands with an Aids patient, conspicuously removing her gloves first in a gesture that did much to dispel public fear of the disease.) 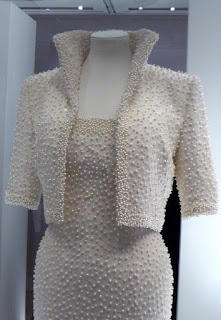 Two iconic dresses in the exhibition are the ink blue velvet gown by Victor Edelstein that she wore at the White House when she danced with John Travolta and this pearl encrusted dress with a high collar by Catherine Walker, christened by the Princess as her ‘Elvis’ dress. Designer Oscar de la Renta summed up the impact she made whenever she appeared: “She had tremendous star quality. When she walked into a room, there wasn’t anyone who didn’t notice.” 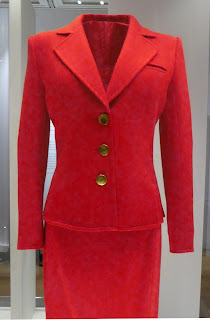 Walker became her favourite designer, and together they honed and streamlined Diana’s image, creating a ‘royal uniform’ – simple outfits that would focus attention on her work, not her wardrobe. She wore cheerful colours that children would like, in specially weighted fabrics that would not crease or crumple. She would never wear a hat to a hospital, because she said you could never cuddle a child with a hat on, and chose bright, chunky jewellery that they could play with. This red day suit was worn in 1996 at the launch of an HIV/Aids Charity London Lighthouse appeal. 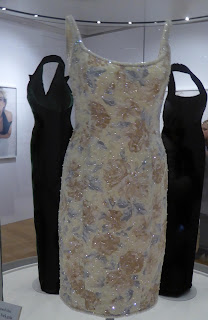 In 1997, after her divorce, 97 of her dresses were sold at Christie’s in New York, raising $3.25 million for charity. Diana wore this Catherine Walker shift dress, with deliberately light and understated embroidery, to the gala event preceding the auction. Who could have guessed that in a little over two months she would die in a road accident in Paris and people would be queuing to place flowers outside her Kensington Palace home? But as this exhibition shows, her legacy endures. The 25 dresses and many photographs will trigger a flood of memories for visitors. Some of the outfits have been on show before, but this is the first display to examine the way her style evolved, and how she used her image to engage people and champion the causes she cared about. As designer David Sassoon put it: “There will never be anybody to replace her. She was unbelievably genuine and completely unique.”

The exhibition runs throughout 2017.
http://www.hrp.org.uk/kensington-palace/visit-us/top-things-to-see-and-do/diana-her-fashion-story/#gs.JLSYOfQ