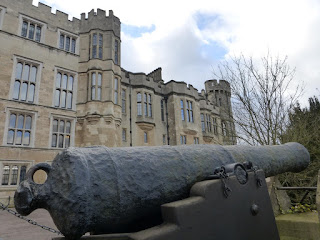 Answer: a gun that sits on the North Terrace of Windsor Castle, pointing towards Eton College, the old school of Princes William and Harry.
A nearby plaque records it was part of the armament of HMS Lutine, lost off the coast of Holland on Oct 9 1799. The wreck was later handed over by the Dutch government  to Lloyds, where the treasure it had been carrying was insured. The gun and the ship’s bell – along with some of the gold - were salvaged many decades later. The bell now hangs from the rostrum at Lloyds of London and is still rung: once for bad news, twice for good. Presumably Lloyds didn’t need the gun, which was rather the worse for wear after almost a century underwater. So it was presented to Queen Victoria and to this day decorates Windsor Castle’s North Terrace, once described as “the noblest walk in Europe”.
Posted by sandra at 11:51