Emma Hamilton was the “It Girl” of the 18th c, a shooting star whose trajectory took her from poverty to international celebrity and back to poverty again. She has always been remembered as the mistress who captured the heart of the nation’s hero, Horatio Nelson. But as this new exhibition at the National Maritime Museum in Greenwich shows, this was only one part of an extraordinary life. The daughter of a Cheshire blacksmith, Emma entranced Europe with her beauty and achievements and was feted by kings and queens. Yet in the end she was imprisoned for debt and died in poverty in Calais.
The exhibition presents her story as a play in four acts, bringing together more than 200 objects – paintings, personal letters, prints, costume and jewellery – that illuminate her dramatic life.  Act One: Becoming Emma, encapsulates her early years.  Born Emy Lyon in 1765, her father died when she was two months old and, raised by her mother, a servant, she had no formal schooling. At the age of 12 she made her way to London and Covent Garden, where high culture and fashionable celebrity met a grimy underworld of sexual exploitation. She became the mistress of a young nobleman, but was rejected by him when, just 16, she became pregnant. A letter in the exhibition to an admirer, Charles Greville shows her despair: “O G, what shall I dow what shall I dow... what else am but a girl in distress, in reall distress..... tell me what is to become on me.” He came to her rescue, installed her in a house with her mother, made provision for the child and introduced her to the great portrait artist, George Romney.
She became his muse, and he painted her dozens of times in different roles – as Circe, Cassandra, Medea, a bacchante, Ariadne, Miranda, even St Cecilia. Fourteen of these portraits are on display, along with copies that were sold in print shops to an avid public.

Greville, however, needed a wealthy wife, and Emma, now famous, was a hindrance. So, as we discover in Act Two: International Celebrity, he sent her, ostensibly for a holiday, to his uncle, Sir William Hamilton, the British envoy in Naples. In fact, she was being handed over to be his mistress. When Emma discovered the truth, she was devastated and wrote angry and pleading letters to Greville that went unanswered.
Eventually, intelligent and enterprising as she was, she determined to make the best of her circumstances and set about improving and educating herself - with the encouragement of Sir William. She studied the classics, languages, history, singing and dancing. She used her experience of modelling for Romney to create her own performance art: the ‘attitudes’, small, wordless plays (recreated in a memorable video for the exhibition) that brought to life the paintings and sculptures that drew foreign tourists to Italy. They charmed Sir William’s many guests, and were copied by other female artists. 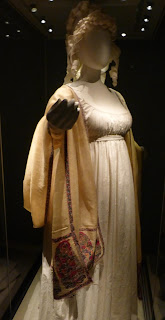 Emma devised a simple Grecian-style white dress, accessorised with a shawl, for her performances, popularising a fashion that spread all over Europe. A deep affection grew between her and Sir William, a widower. In 1791 he married her, and Emma made an incredible leap up the social ladder to become Lady Hamilton. As confidante and favourite of the Queen of Naples and Sicily, Maria Carolina, she came to wield considerable political power. She helped the Royal Family escape from an uprising and was awarded the Order of Malta for arranging shiploads of corn to be sent to the island’s starving population during a siege. Nelson later wrote:  “The British fleet under my command could never have returned.... to Egypt had not Lady Hamilton’s influence with the Queen of Naples caused letters to be wrote... to encourage the fleet to be supplied with everything.”
When Nelson arrived back in Naples after his victory at the Battle of the Nile, she organised lavish celebrations in his honour. She wrote: “God, what a Victory.....My dress from head to foot is alla Nelson. My earrings are Nelson’s anchors. In short, we are be-Nelsoned all over.” (The exhibition has a flounce of her dress embroidered with his name (below).

The inevitable happened – their mutual admiration turned into love. But both were already married. You can read one of his earliest letters to her, agonizing over the difficulties of their situation: “No separation no time..... can alter my love and affection for you, it is founded on the truest principles of honor and it only remains for us to regret... that there are any obstacles to our being united in the closest ties of this Worlds rigid rules, as we are in those of real love.” When the ageing Sir William, who seemingly tolerated the relationship, was recalled to Britain, Nelson travelled overland with them, welcomed and feted at every stop.
Act Three: Constructing Paradise, sees the three of them back in London, the scandalous affair public knowledge. Emma became pregnant, but tried to keep it a secret. Their daughter, Horatia, born in 1801, was given into the long-time care of a nurse and her parentage disguised. The lovers longed for a quiet, domestic life. Nelson, separated from his wife, bought them a rather dilapidated country house, Merton Place, which Emma did her best to turn into a home. But the navy sent him back to sea and from then until his death at the Battle of Trafalgar in 1805 they had little time together. Emma, however, was always in his thoughts.
In the last Act, Falling Star, we see the portrait of her that hung in his cabin and one of a pair of betrothal rings that they exchanged.
Before the Battle of Trafalgar  he added a codicil to his will: “I leave Emma Lady Hamilton therefore a legacy to my King and Country that they will give her an ample provision to maintain her Rank in life...” As he lay dying he asked that his pigtail (below) be cut off and sent to her. 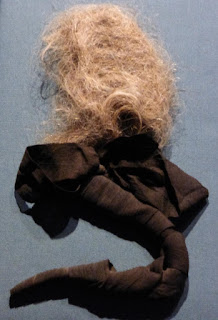 Emma never recovered from the tragedy of his death. The final item in the exhibition is the uniform coat that he wore during the battle (below), pierced by the bullet that killed him. It was grudgingly returned to Emma, and was seen arranged beside her on her bed, as she lay there, grief-stricken. 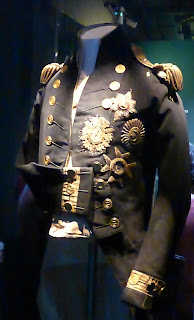 The government ignored Nelson’s request that she be looked after, and his estate, apart from Merton Place, went to his brother. Emma, lampooned by cartoonists, tried to maintain her fashionable lifestyle but things became increasingly difficult without a man to support and protect her. (Sir William had died in 1803.) In 1813 she was arrested for debt and sent to King’s Bench Prison. Friends helped arrange her release the following year and with Horatia (who may never have been told Emma was her mother) she fled to Calais. Her health, damaged by alcohol, finally gave way and she died there, destitute, in January 1815 at the age of 49.
In the years that followed, Nelson’s reputation grew, outshining her achievements and reducing her story to that of a great man’s seductive mistress. The curator of this fascinating exhibition, Quintin Colville, succeeds brilliantly in the long-overdue job of rehabilitating Emma as a dazzling woman who did her best to fight through the barriers and conventions of a man’s world. Interestingly, the story also invokes uncomfortable parallels with the perils of today’s celebrity-obsessed culture.