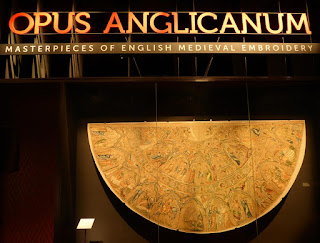 The first thing you see as you enter the darkened rooms that house the V&A's fascinating exhibition is the Bologna cope, its entire surface embroidered with silver-gilt and coloured silk thread. It was made between 1310 and 1320, at a time when English embroiderers created their most ambitious works, and probably belonged to Pope Benedict XI. It was donated to the Convent of San Domenico in Bologna, and is now one of the treasures of the city’s Museo Civico Medievale. The intricate scenes, reflecting English manuscript illuminations of that time, illustrate the life of Christ and the Virgin Mary in delicate detail – here we have the Crucifixion. 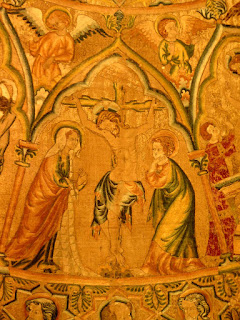 Above each scene, angels sing and make music. And as curator Dr Glyn Davies pointed out, one of the embroiderers may have included a little joke: as the Three Wise men ride to Jerusalem, an angel wields clappers, perhaps making the sound of horses’ hooves. 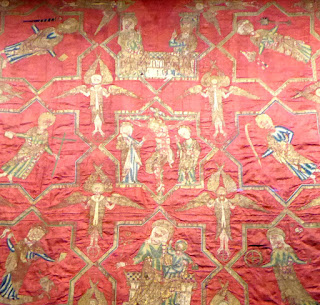 Which led me to wonder about the people behind these treasures, such as the Vatican cope (above). They were not the work of high-born ladies or nuns, but the result of an industry centred on London, where the skill of craftsmen and women was so highly regarded they were commissioned to create specially-designed vestments and hangings for kings, queens, popes and cardinals throughout Europe and even as far as Reykjavik in Iceland. Many thousands of stitches were needed to create works of such complexity. Ground fabrics could be rich velvets, precious silks or sturdy linen that would be covered with intertwining foliage and fantastical birds (below, in the Toledo cope, back in London after almost 700 years). They were often decorated with pearls and other ornaments. 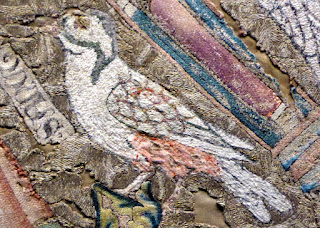 It must have been a young person’s trade though – most of the stitching is so fine as to be almost invisible, and was done without the aid of magnifying glasses or spectacles. There were probably pattern books to help with the designs – a velvet cope made around 1493 for Cardinal John Morton has decorations similar to those in a slightly-later Herbal and Bestiary model book. There’s also an indication that sometimes there was pressure from a patron to hurry up: in one embroidery the outlines of a complicated background pattern have been ignored in favour of something much simpler. 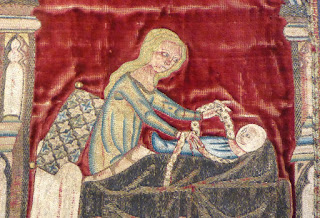 Most of the items on display are ecclesiastical. This tender portrait of the Virgin and Child (1335 - 1345) was most likely commissioned by the Bardolf family and used to adorn vestments or altar furnishings. 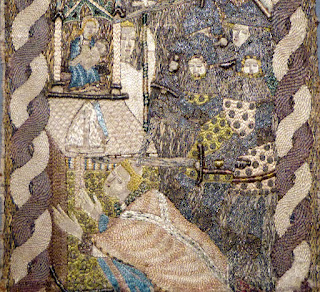 Another favourite subject was Thomas Becket. This embroidery showing his martyrdom was probably created in 1370 to mark the bicentenary of his death. Some items, such as the shoes of Archbishop Hubert Walter, 1170 – 1200, survived because they were buried with their owners. Others were kept in cathedral treasuries. 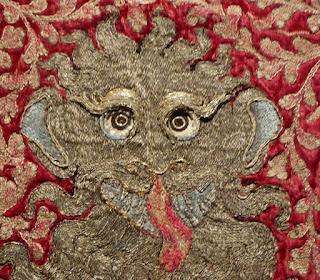 Secular items were more likely to wear out or be susceptible to changes in fashion so were often discarded or cut up and reused. The surviving fragment of a horse trapper (above), a heraldic cover that may have been made for Edward III and used when he met the Holy Roman Emperor, Louis IX, in 1338, has lions embroidered with gilded silver and silver thread and has been preserved by the Cluny Museum in Paris. 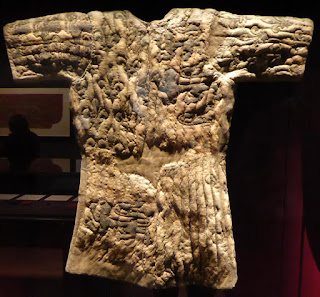 This surcoat belonged to Edward's son, the Black Prince, who died in 1376 at the age of 45. It is on loan from Canterbury Cathedral, where it was suspended over his tomb. 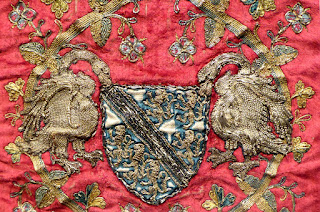 Also on display is a red velvet panel that may once have been part of furnishings, but was later adapted for a Chasuble - a liturgical vestment. It contains chained swans, a badge of the Bohun family. Beside it is a swan jewel, also believed to have belonged to them. 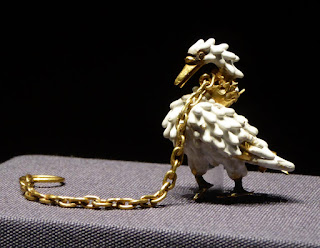 The Black Death in 1348 led to a huge loss of life and social upheaval in England. Timesaving methods were introduced, such as the production of separate, standardised motifs that could be cut out and ‘powdered’ - applied to textiles in a scattered fashion. The exhibition also explores the period from 1350 to the Reformation of the 1530s, which led to the destruction of many precious embroidered church vestments, stripped of their jewels and burned to recover the gold and silver from the threads. Those that did survive were altered to suit the new religious requirements, taken abroad or hidden. But English embroidery workshops were still prestigious enough in the early 16th c to attract elaborate commissions.

The final item in the exhibition is a masterpiece of bling, a pall from the Worshipful Company of Fishmongers that has been used for funerals and commemorative masses ever since it was created in the early 16th c. Mermen and mermaids are depicted alongside St Peter, the Fishmongers’ patron saint. The attention to detail is impressive - look closely and you'll see the mermaid’s mirror includes her reflection. 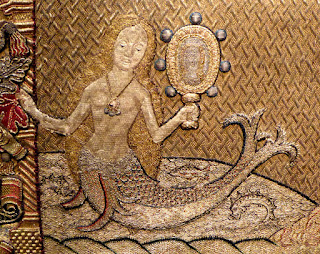 This show is billed as a ‘once in a lifetime’ exhibition – and it’s not surprising. The exhibits are incredibly fragile, and while the V&A holds the largest collection of these works in the world, uniting them with others that are housed elsewhere is not easy. The last time such a display was mounted was 50 years ago; the museum says another one is unlikely.

Opus Anglicanum: Masterpieces of English Medieval Embroidery runs at the V&A until Feb 5 2017, Admission £12 (concessions available).
vam.ac/uk/opus
Supported by the Ruddock Foundation for the Arts and Hand and Lock.
A number of emboidery-focused events, short courses and practical workshops complement the exhibition. See http://handembroidery.com/home/hand-lock-x-va/
Posted by sandra at 18:30