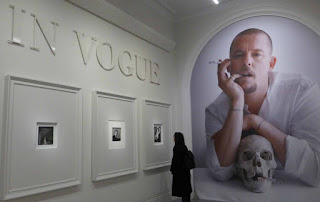 This fascinating exhibition at the National Portrait Gallery is not just about fashion – it’s a journey through history – a reflection of society over the past ten decades.
It starts in the present, with a huge image of Alexander McQueen with a cigarette and a skull, then winds its way back to the magazine’s beginnings in 1916 – launched because World War I made transatlantic shipments of American Vogue impossible. The first edition – price one shilling – contained a forecast of autumn fashions and promised to tell readers ‘where the waistline ought to be, and whether hats have wings’. Many of the early photographs and issues are scratched and cracked – in fact, it’s a wonder so much has survived, since during World War II, the magazine’s archive was largely pulped to make more paper as part of the war effort. 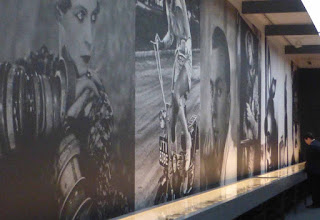 There's a magazine from each year on display. All the great names of photography are featured: Baron Adolph de Meyer, Norman Parkinson, Lee Miller, Cecil Beaton, Snowdon, Helmut Newton, David Bailey, Patrick Demarchelier, Mario Testino..... The women featured in the early editions are a mix of society figures (including a young Queen Elizabeth the Queen Mother and the Duchess of Windsor on her wedding day) and relatively unknown models looking haughty, refined and immaculate, even when photographed by Cecil Beaton in 1941 against the bombed-out ruins of  Middle Temple. ‘Fashion is indestructible’, reads the caption.
The austerity of the war years is followed by a burst of optimism, reflected in less formal images. In the 1950s the ‘Young Ideas’ pages were launched and social equality of a kind reached Vogue, with a series of portraits of people engaged in ‘small trades’: chimney sweeps, dustmen, rag and bone men. 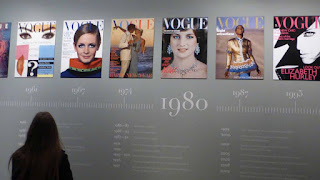 A timeline (above), showcases covers from across the decades. Highlights of the later rooms include Ronald Traeger’s 1967 photo of Twiggy zooming by on a bike, Peter Lindbergh’s 1990 cover of the ‘Supermodels’ - Naomi Campbell, Linda Evangelista, Tatjana Patitz, Christy Turlington and Cindy Crawford - and Corinne Day’s controversial Kate Moss underwear shoot from 1993, taken at the height of the ‘grunge’ trend. Rarely seen photographs of the Beatles and a 27-year-old Jude Law are included, along with portraits of people who have shaped the cultural landscape of the 20th century: from Henri Matisse and Marlene Dietrich to Princess Diana and David Beckham. Prince Charles is captured in his garden at Highgrove (below) while Boris Johnson poses at the Olympic Park. 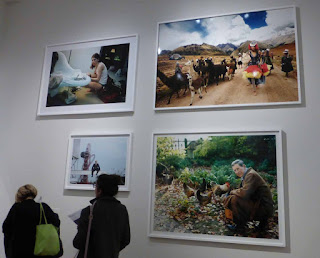 Editor in Chief of British Vogue, Alexandra Shulman, describes it as a landmark exhibition. “I am incredibly proud of this collection of exceptional photography and of the whole concept of the exhibition," she says. "It shows the breadth and depth of the work commissioned by the magazine as well as Vogue’s involvement in the creation of that work.”


Vogue 100: A Century of Style, sponsored by Leon Max, runs until May 22. Admission without donation £17; Concessions available.
http://www.npg.org.uk/whatson/vogue/exhibition.php
Posted by sandra at 17:22