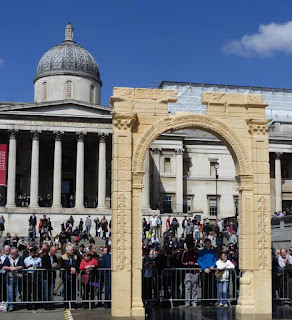 A replica of Palmyra’s Arch of Triumph has been erected in Trafalgar Square. The two-thousand year old original was destroyed by IS militants after they overran the complex of ancient ruins in Syria in May last year. Palmyra was recaptured in March, but by then, some 20 per cent of the buildings had been reduced to rubble.
The scale model - 20 ft high - is two-thirds the original size, and made of Egyptian marble. It was created using 3D technology, using photographs of the arch built by the Romans.
The director-general of antiquities and museums in Syria, Professor Dr Maamoun Abdulkarin, said the arch was a 'message of peace' and that plans to rebuild Palmyra - a Unesco World Heritage site - should be treated as a global mission.

The arch will be on display in London until April 22, then travel to cities such as New York and Dubai before finding a permanent home near its original location.