By me William Shakespeare: A Life in Writing 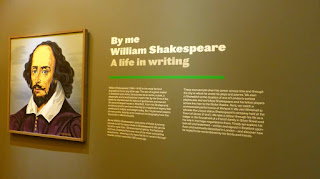 The initial display in this exhibition at London's Somerset House of documents relating to the life of William Shakespeare is a record of a court case (below) involving a group of ‘violent’ thieves armed with ‘swords, daggers, bill axes and such’, being sued for pulling down a playhouse in London’s Shoreditch called the Theatre. The Burbage family had built this for their company, but after a series of disagreements about the lease of the land, it was dismantled in a night raid on December 28, 1598 and the timbers removed to Southwark so a new Burbage theatre, the Globe, could be built. Was Shakespeare involved? He must have known what was going on - he was a member of the company and a good friend of fellow actor Richard Burbage. But a witness swore in court he couldn’t remember any names, the Burbages won the case anyhow, and the Globe thrived.
Despite Shakespeare’s fame, actual historical documents providing evidence about his life are few, which is why the six brought together here by The National Archives and King’s College, London, are so important. More court papers deal with the trials of those involved in the failed Essex Rebellion of 1601. The conspirators had used a performance of Shakespeare’s play, Richard II (in which a character, Bolingbroke, leads a rebellion against the king), to fuel insurrection. The Earl of Essex was charged with treason and executed, as was his steward, Sir Gelly Meyrick, who organised the performance. But again there is no mention of the playwright - he escaped being arrested, perhaps a sign of the regard in which he was held by Elizabeth 1.


Evidence of continued royal favour comes from court papers that record how members of Shakespeare’s company were given four and a half yards of red cloth to be worn during King James 1’s coronation procession in 1604. An account listing plays performed at court shows that his troupe appeared in front of the king more than any other company. Also in 1604 Shakespeare provided evidence in a dispute involving his landlord, Christopher Mountjoy over a dowry, and the exhibition includes a transcript of this (below) and his earliest recorded signature. (This episode may have influenced the plot of his play, Measure for Measure, written about that time.) 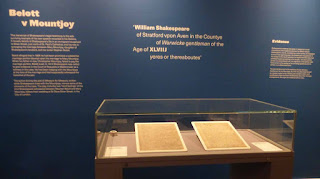 Shakespeare died on April 23, 1616, and perhaps the most important document on display is his will.  Recent careful conservation has revealed that this was revised several times. He left the bulk of his estate to his elder daughter, Susanna, but just before his death, added personal bequests, including a silver bowl to his younger daughter Judith, memorial rings to actor friends in London, and his second-best bed to his wife (who would have had a marriage settlement to protect her interests in the family property during her lifetime).  The three-page document has his signature on each page, all slightly different. 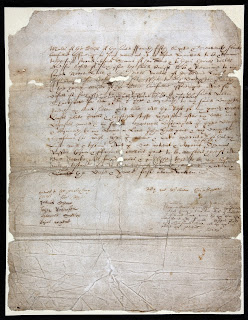 2016 is the 400th anniversary of the Bard’s death, and a host of other events are planned. The papers on display here were brought out of storage to mark the occasion, and once the exhibition ends in May, they are unlikely to be seen again for many years. The writing on the documents is crabbed and hard to read, and there’s little other visual material apart from an audio-visual map of London that pinpoints locations crucial to the displays. But the curators do their best to instil life into the documents and put them in context, and it’s still a thrill to pore over the manuscripts and discover Shakespeare’s actual handwriting. An interesting footnote is that exhibition is in the Inigo Rooms of Somerset House – it was at the original Somerset House (demolished 1775) that some early performances of his plays took place.
By me William Shakespeare: A Life in Writing runs until May 29 2016 at the Inigo Rooms, Somerset House, London. Admission £10 (Concessions available)
http://www.bymewilliamshakespeare.org/
http://www.shakespeare400.org/