Ten things you may not know about the Magna Carta 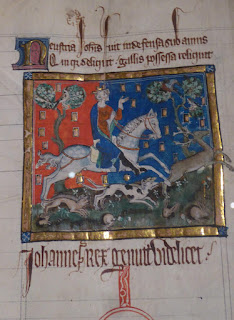 John was a tyrant, John was a tartar
John put his name to the great big charter
Every baron from Thames to Tweed
Followed the road to Runnymede.

Runnymede is currently in the news with celebrations being held to remember the signing of the Magna Carta 800 years ago, on June 15. To mark this anniversary, the British Library has mounted a major exhibition, which includes two surviving copies, two of King John’s teeth – and many interesting facts:

1. Despite common assumption, King John never signed the charter when he sat down with his Barons. Instead, he affixed his seal – the usual practice for kings at that time.
2. The provisions in the document lasted just 10 weeks before it was annulled by the Pope, who declared it to be 'base and shameful, null and void".
3. It was revised by later monarchs and entered the statute books in 1297.
4. It was used to draft the 1628 Petition of Right, which limited the authority of Charles I, and was cited against him during his trial the following year. Since then, the law has slowly encroached on royal privilege, and today, no one in the UK is above the law, not even the Queen.
5. It influenced the wording of America’s Declaration of Independence and Bill of Rights.
6.The slices in the bottom of one of the copies on display at the British Library (below) are not, as urban legend tells, from King John’s knife, stabbed down in anger, but to hold the long-since-lost wax seal.
7.Four manuscripts of the 1215 Magna Carta survive today. One is owned by Lincoln Cathedral, one by Salisbury Cathedral, and two are with the British Library.
8.In 1941 the British Cabinet, seeking ways to persuade the US to enter the war, considered giving Lincoln Cathedral’s one to Washington as a gift.  But the plan foundered when it was realised the ‘bit of parchment, more than 700 years old’ was not theirs to give.
9 Only three provisions remain in force today: the right of trial by jury, protection for the liberties of the City of London and other cities, boroughs, towns and ports, and the freedom of the Church of England.
10 The British Library occasionally gets letters from drivers asking if the Magna Carta protects their rights to appeal against parking tickets. It doesn't. 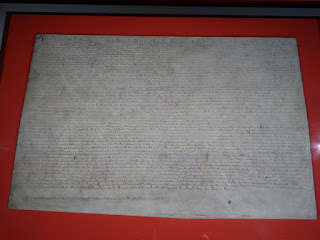