The London Loop – from High Barnet to Cockfosters 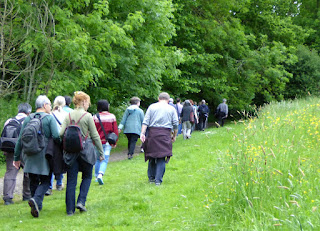 This weekend’s free Walk London Spring into Summer excursions saw us with a group of enthusiastic walkers making the trek across the top section of the London Loop – a 150-mile walking path around the outskirts of the capital. The three and a half mile ramble saw us passing woods, Georgian houses and the site of a 15th c battle.

We started at High Barnet Underground station, having been met by City of London guide Paul Baker, who lives locally. A short walk through suburbia took us to a wooden gate. Filing through, we found ourselves in a different world. King George’s Field, once part of a grand estate, is a public open space given in 1937 to commemorate King George V. It covers 28 hectares and is surrounded by hedgerows, woodland and small streams - a haven for birds and wildlife, and popular with dog-walkers. 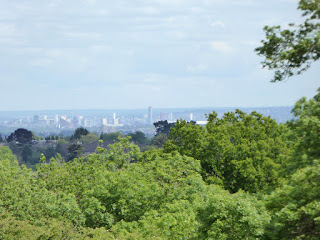 A path led us uphill for about a quarter of an hour. Then, looking back, came our reward: a magnificent view of the city and Docklands with the North Downs on the horizon. The area adjoining this high point was the scene of a crucial struggle during the War of the Roses. The Battle of Barnet was fought here in early morning fog on 14 April 1471. It was a victory for the Yorkist forces of Edward IV, who had seized the throne from the Lancastrian king, Henry VI, but hundreds of men on both sides died, among them Warwick the Kingmaker. 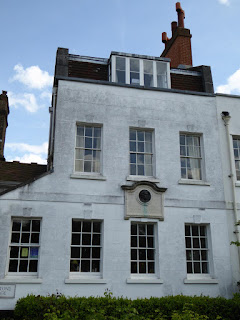 Our route then took us past Monken Hadley Green, with its row of beautiful Georgian houses. One (above) is named after the explorer David Livingstone. He stayed here in 1857/8 before returning to Africa. Other past residents in the area include the Victorian author Fanny Trollope and her more famous son, Anthony (Barchester Towers, The Way We Live Now) who moved there in the vain hope the more healthy air would help her daughter's TB. 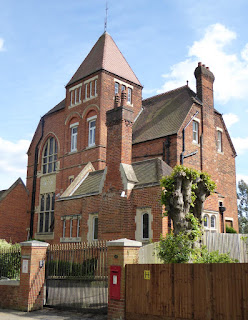 Further along is Monkenhurst (above), a Victorian mansion bought and saved from demolition by the comedian, Spike Milligan. Father and son writers Kingsley and Martin Amis lived at nearby Lemmons, formerly Gladsmuir House, and the poet laureate Cecil Day Lewis died there during a visit in 1972. 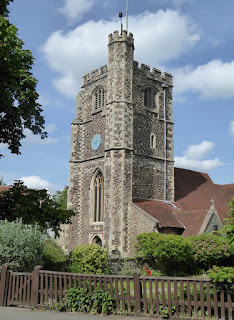 Opposite is St Mary’s church, which dates from 1494. We didn’t have time to go in, but discovered another famous connection: it was painted by Turner while staying next door with some friends. (The picture is now in Tate Britain.) There's also a row of charming almshouses, founded in 1612 by Sir Roger Wilbraham for 'six decayed housekeepers'. 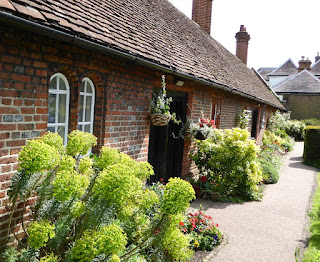 The last part of our walk took us along the south side of Monken Hadley Common. This was granted to parishioners for grazing livestock in compensation for the loss of their rights in the royal hunting forest of Enfield Chase after its enclosure in 1777. 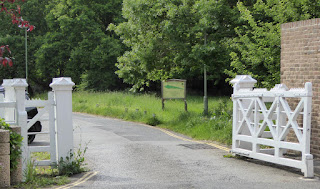 Five pairs of white gates were installed to stop cattle straying (here at the south-east corner), but today, with the livestock gone, they are left permanently open and the common is a conservation area and popular recreation spot. 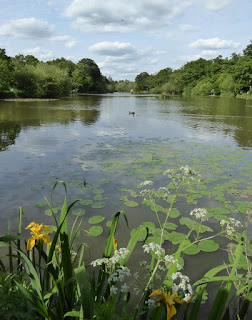 We crossed Pymmes Brook and reached the tranquil Jack’s Lake, named after a former landowner. Some anglers could be seen on the far side, and waterfowl were gliding across, enjoying the spring sunshine.

Another short walk through woods brought us to Cockfosters for a train home – our final treat being a glimpse of cricket on the sports grounds. 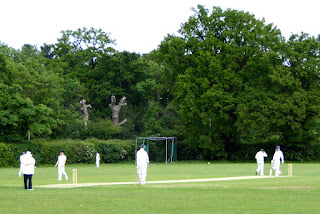 It was a fascinating afternoon, thanks to Paul's stream of facts and anecdotes - an introduction to a part of London we may never otherwise have seen. (He does other walks in the area too: http://www.barnetwalks.talktalk.net/walks.html)
Walk London’s three free weekends of walks – funded by Transport for London – take place in spring, autumn and winter. There are usually around 40 to chose from, varying from a couple of miles to more than eight.
http://www.walklondon.org.uk/
In between, you can try the self-guided tours:
http://www.walklondon.com/