These exquisite Tudor and Jacobean portraits have been described as the greatest works of art ever produced in the UK. Likened to works by Michelangelo and Raphael, they were prized by monarchs, courtiers and the rising middle classes. Now, for the first time in over 35 years, the National Portrait Gallery has brought together masterpieces by the two leading exponents of this art, jewel-like portraits of some of the most important members of society at that time. Among them is the Earl of Leicester, the long-term favourite of Elizabeth I.
Nicholas Hilliard (1547 – 1619) was born in Devon, and trained as a goldsmith in London. Just why he turned to miniatures is not clear, but his skill was exceptional. He quickly came to the attention of rich and powerful patrons, becoming Elizabeth's official limner, or miniature painter. Isaac Oliver (c.1565 – 1617), from a Huguenot refugee family, was Hilliard’s pupil and went on to be appointed miniaturist to Anne of Denmark, wife of James 1. Miniatures first appeared in the early 16th c, in the wake of that other form of diminutive and intimate art, manuscript illumination. Like manuscripts, miniatures were painted in watercolour on vellum. This was attached to a piece of card (often a playing card) for support. The exhibition has a helpful display and video of the techniques and tools used, based on a treatise written by Hilliard. He doesn’t mention magnification, but looking at the exhibits with one of the gallery’s magnifying glasses, or at expanded photos, you see things not visible to the naked eye, as with this portrait of the young Francis Bacon. 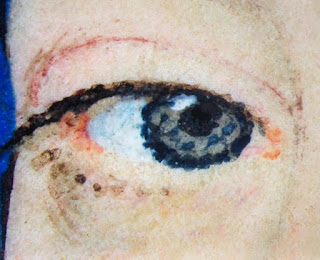 Hilliard also developed a technique to give a sparkle to the jewels he painted, putting a minute dot of coloured resin on a silver backing that reflected the light. He was Elizabeth’s favourite artist for 22 years; she usually sat for him out of doors, so there were no shadows on her face. Supposedly, by the end of his life, he could paint her from memory, but always showed her as a youthful beauty with idealised features.
Hilliard even painted himself, looking every inch the gentleman, with elaborate ruff and sharply-pointed beard. Nothing indicates that he is a painter. This reflects his view that “none should meddle with limning, but gentlemen alone”. Such portraits could be set into ornate jewelled cases and worn around the neck, pinned to clothing, or secretly concealed about the body, as a token of love or friendship.
Symbolism is everywhere: in one striking image, he captures a young man in the throes of love, holding a locket near his heart, while behind him blaze golden fires of passion. Oliver’s paintings reveal more Continental influences – his skill in painting landscapes and use of perspective is obvious in some of the larger works.
A stunning portrait of the Earl of Southampton, possibly the ‘Mr W.H.’ to whom Shakespeare dedicated his Sonnets, has him looking like a modern rock star.
Oliver portrayed himself, like Hilliard, as a gentleman, in elegant clothing.
He did paint Queen Elizabeth once, but probably because he made no attempt to hide her wrinkles and lines, was never asked back.
However, he did find success in the Jacobean court, capturing the likeness of Queen Anne as well as that of Prince Henry and the young Charles I; a whole section of the exhibition is devoted to this time. The two men also painted more ordinary men and women who, unlike the aristocrats, would pay on time. (Hilliard had financial problems all his life.) The difference in their styles is clear when you look at the portraits together – Hilliard prefers a formal approach, while Oliver is more naturalistic and uses shadowing.

Between them, they bring to life the inhabitants of a long-gone world. The exhibition ends with a video of enlarged details that can only be marvelled at. You leave, full of wonder, but with one tantalising question to which extensive research brings no clear answer: How did they do it?

Elizabethan Treasures: Miniatures by Hilliard and Oliver is at the National Portrait Gallery, London, until 19 May 2019. Admission £10, concessions available.