Charles I - King and Collector

One of the last things that King Charles I saw on January 30 1649 as he made his way through the Banqueting House to the scaffold outside was the glorious ceiling painting he had commissioned in honour of his father, King James. The work of Peter Paul Rubens, it was one of some 2000 works of art in Charles’s collection, and one of the few not sold off after his execution by Oliver Cromwell. This sumptuous exhibition at the Royal Academy reunites 140 of them, including more than 90 pieces rescued and returned to the Royal Collection by subsequent monarchs. Charles acquired a taste for art when in 1623 he visited Madrid to pay court to a Spanish princess. He returned to England without his prospective bride but with a number of paintings, including some by Titian and Veronese. Bitten by the collecting bug, he went on to acquire works amassed by the Gonzaga family of Mantua, who had fallen on hard times. Among them were paintings by Leonardo and Raphael, as well as many from Northern Europe, and some antique sculptures, including this Crouching Venus (2nd c AD). 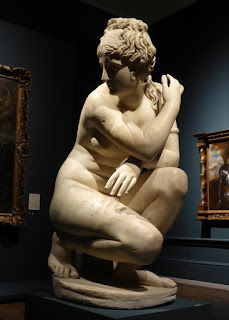 By now he had married Henrietta Maria, sister of King Louis XIII of France. She had grown up in a court surrounded by art, and her sophisticated tastes are thought to have influenced her husband.
She commissioned van Dyck to paint the triple portrait of Charles (top) that graces the first room of the exhibition. It was to be the basis of a marble bust of the king by Bernini, and was sent to him in Rome. (He was too busy to travel to England.) Sadly, the sculpture was destroyed in a fire in 1698, but the portrait remains.
Three other van Dycks are reunited to form the core of this exhibition – two equestrian portraits of the king, and the celebrated one of him hunting, on loan from the Louvre and back in England for the first time since the seventeenth century. (It’s thought that Queen Henrietta Maria took it with her when she went into exile in France after her husband’s death.)
Interestingly, not all the works reflect the king’s personal taste – many were gifts from ambassadors or other nobles. Mantegna’s monumental series, The Triumph of Caesar c 1484 – 92, which fills a dedicated gallery (below), might have been seen as somewhat old-fashioned when it arrived; it was displayed at Hampton Court, rather than Whitehall Palace. 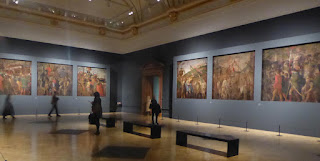 It also seems Rembrandt was not held in the esteem he is today, which was reflected in the price fetched by an exquisite portrait of an elderly woman, probably his mother, in Cromwell's sale - just £4. However Titian's Supper at Emmaus, (below) went for £600, while Raphael's La Perla, now in the Prado, was valued at £2000.
The works the Stuart monarch amassed have been described as “the finest collection of pictures ever assembled in this country,” and are credited with changing the appreciation of art in England. It’s taken five years of planning and international negotiations, aided by the support of the Prince of Wales, to stage this exhibition. As well as the Royal Collection, major lenders include the National Gallery, London, the Musée du Louvre, Paris, the Museo Nacional del Prado, Madrid, and Mobilier National, Paris. 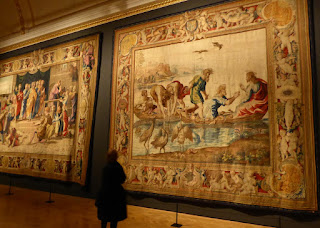 Among the treasures from Paris are the Mortlake tapestries of Raphael’s Acts of the Apostles, perhaps the most spectacular set of tapestries ever produced in England (above). The curators have been helped in understanding the importance to the king of various items by a working draft of a 1639 inventory (below) by Abraham van der Doort, the first Surveyor of the King’s Pictures. 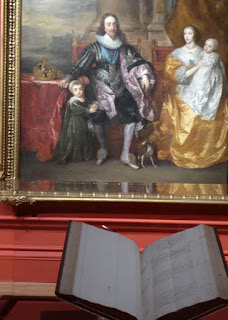 In it, he describes the works and where they were hung. It reveals that the van Dyck painting in the background, showing the King and Queen with Prince Charles and Princess Mary, was known as the "Greate Peece" and was in the Long Gallery at Whitehall Palace. Sadly, around 1600 of the items listed have disappeared, lost, destroyed, or perhaps lanquishing unrecognised in private collections or archives. The curators are hoping that the interest created by the exhibition might prompt a closer look at works in storage, to see if they bear the tell-tale 'C' and crown.
Charles I, King and Collector. Royal Academy, London, until April 15 2018. £20 (concessions available)

www.royalacademy.org.uk
Posted by sandra at 18:26