Hokusai: beyond the Great Wave A confession: I hadn’t really appreciated the extent of the influence of the Japanese artist, Hokusai, until I visited the current exhibition at the British Museum – Hokusai: beyond the Great Wave (until August 13. So it was fascinating to discover through the background material on display the fame he achieved in his own lifetime and the impact his prints had when they were first exhibited in Paris in 1867, almost 20 years after his death. Van Gogh later wrote All my art is based to some extent on Japanese art. Monet himself acquired 250 Japanese prints, including 23 by Hokusai, and I spotted The Great Wave beside a dresser while at the painter's home in Giverny a few days after the show opened. 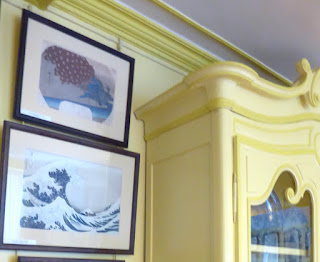 Hokusai created The Great Wave in 1831, when he was already seventy. It shows three fishing boats heading into a great storm wave. Just visible are the oarsmen who crouch forward, battling the water’s power. The wave encircles Mt Fuji, spray falling like snow on its sacred peak. It was part of an immensely popular series – as many as 8000 impressions were made. With its use of deep perspective and imported Prussian blue pigment, it reflects how Hokusai adapted and experimented with European artistic style, which was just starting to be seen in what had hitherto been a closed country. Mt Fuji remained a model for him in his quest for immortality during his later years. He styled himself Gakyō Rōjin (Old Man Crazy to Paint) and believed the older he got, the greater his art would become. 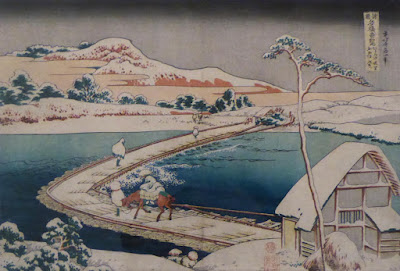 This exhibition is the story of Hokusai’s art in old age and many of the works have never been seen before in the UK. From iconic landscapes and wave pictures to deities and mythological beasts, from flora and fauna to beautiful women, they are amazingly varied. 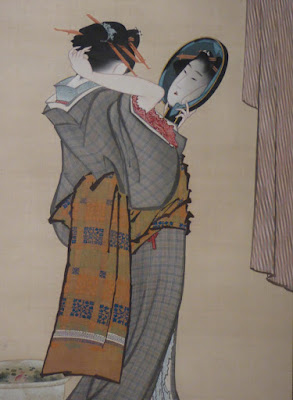 The success of the Great Wave led to more print series, featuring waterfalls, bridges and flowers, such as these poppies. 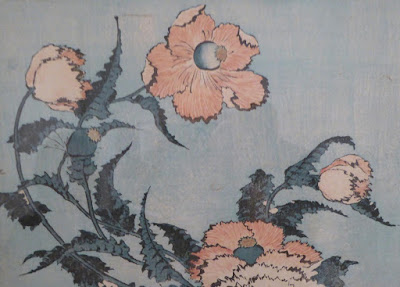 He was supported by his daughter Eijo, herself an accomplished artist, who worked with and alongside him. There is one powerful painting by her in the exhibition, which shows in graphic detail a scene from a Chinese novel of the 1300s, in which a physician cuts into the arm of a general to remove an infected bone.The stoic general himself continues to play a board game, while others avert their eyes from the knife and blood. 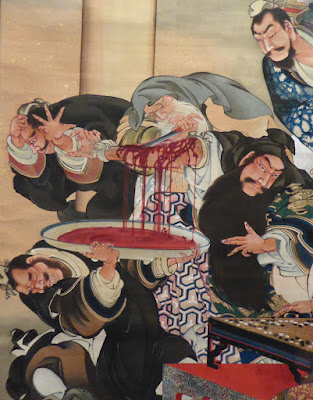 China was a major source of cultural inspiration for Japan. Hokusai reinterpreted its traditions, making them accessible to ordinary people. This man checking for a break in the snowy weather may be a portrait of a heroic bandit from another Chinese novel of the 1300s, Outlaws of the Marsh. 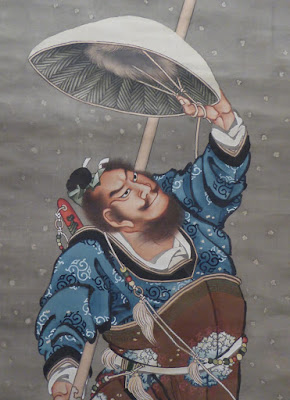 Hokusai had many pupils and produced manuals for painters and craft artists. In 1848 he wrote in a postscript to one of them: ...from ninety years I will keep on improving my style of painting. After I reach one hundred, my only desire will be to revolutionise this vocation. He died in 1849, just short of his 90th birthday. He had already started to use a seal on his paintings with the character Hundred and was producing technically brilliant works to the end, often revisiting his favourite subjects, including waves. 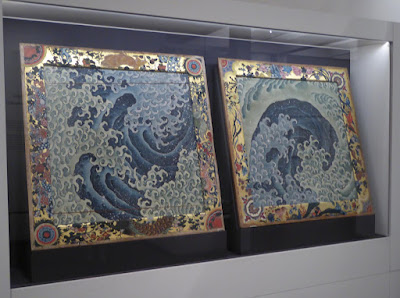 These ceiling paintings were created for a festival cart and date from 1845. 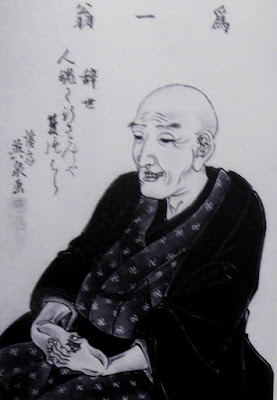 A fellow artist executed this portrait of Hokusai in the 1840s. It was later inscribed with his deathbed poem:
Maybe I’ll unwind
by roaming the summer fields
as a will-o’-the-wisp.
http://www.britishmuseum.org
Posted by sandra at 15:05