Behind the garden wall at Lambeth Palace 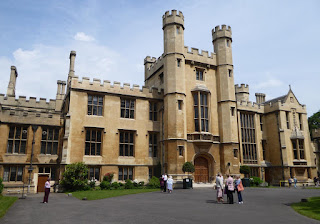 The private garden of Lambeth Palace – the official London residence of the Archbishop of Canterbury –  is open to the public on the first Friday of the month until September. It’s been continuously cultivated since the 12th c, longer than any other in the country and various incumbents have put their own stamp on it. 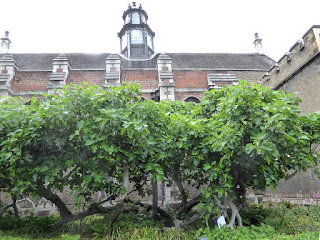 The Palace is behind a high brick wall that runs along the Embankment. One of the first things you see on entering the courtyard is an enormous fig tree to the left of the entrance to the Great Hall. A White Marseilles variety, it was brought from Italy by Cardinal Pole when he arrived to become Queen Mary’s Archbishop in 1556. It still gives two crops of fruit a year, in July and October. The tree has also returned to Italy. In 2014, Archbishop Justin Welby visited Pope Francis in Rome and gave him a cutting from the tree as a symbol of the common heritage of the two religions. 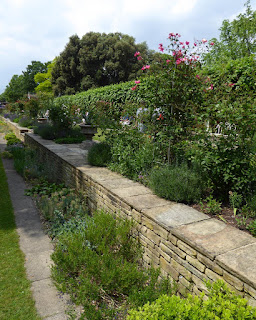 The garden covers 10 acres and includes a terrace, Jewel Border, Rose Arbour, herb garden, bee hives, composting area and many mature trees. Among them is a Tulip Tree, a species introduced to England by Royal gardener John Tradescant the younger, and which was in flower in early June. 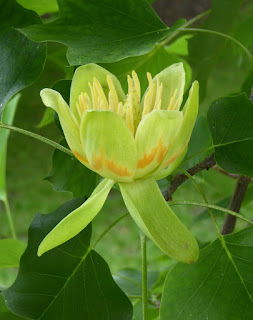 Fittingly, Tradescant is buried next door in the churchyard of St Mary-at-Lambeth, now the Garden Museum and recently reopened after a major refurbishment. 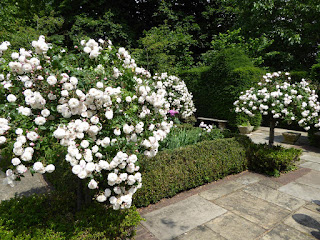 Open day visitors can go on a short guided walk around the Palace garden and learn more of  its  history and of future plans. These include a new purpose-built library and archive which will provide a climate-controlled home for the Palace’s collection of 200,000 precious books and 4,600 manuscripts, some of which go back to the 9th c. It will be at the far end of the garden, surrounded by a new garden designed by Dan Pearson. 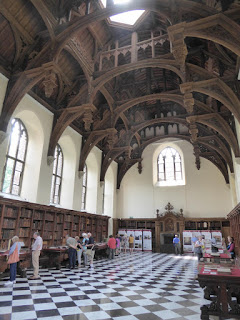 Some of the historic books can be seen in the Great Hall, which was open at the same time as the garden. It’s been recently refurbished - a stunning new black and white marble floor has been laid and the lantern in the elaborate hammer beam roof  repaired. We were also able to look into the Crypt Chapel, described by the architectural hsitorian Nicholas Pevsner as one of the best preserved medieval stone vaults in London. 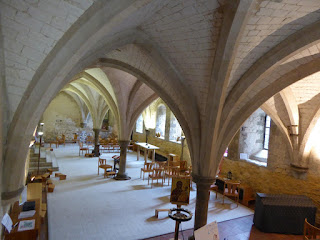 Allow at least two to three hours for this fascinating visit. Admission to the garden is £5, and refreshments are available in a marquee on the lawn.
http://www.archbishopofcanterbury.org/pages/visit-the-lambeth-palace-gardens-.html
Posted by sandra at 14:10