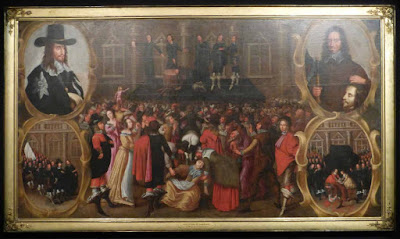 This new exhibition at the National Maritime Museum opens with a huge painting showing the execution of King Charles I in 1649. Somewhere in the crowd of onlookers on that freezing winter day would have been a 15-year-old schoolboy, playing truant to witness the historic event. Samuel Pepys (below, age 33) lived in turbulent times and later, in 1660, began recording it all his famous diaries. Of the execution, he wrote: ”the words that I said the day that the King was beheaded.... ‘the memory of the wicked shall rot”’. 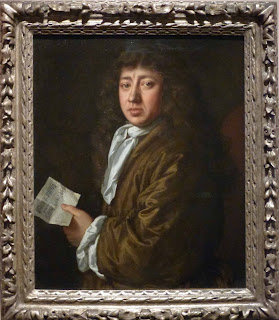 It’s a dramatic start  to an exhibition that brings Pepys’s era to life with a fascinating series of exhibits and paintings. We see the death mask of Oliver Cromwell and items relating to the restoration of the Stuart dynasty under King Charles II. (Pepys was at the coronation, though he records he had to leave early as he had “so great a list to piss.”) There are portraits of the many mistresses of Charles II, including a nude Nell Gwynn that would have been kept in a private room and hidden behind another painting. The curators have also brought together a selection of the lavish fashions of the day, including a court dress with costly Venetian needle lace collar and this embroidered velvet shoe. 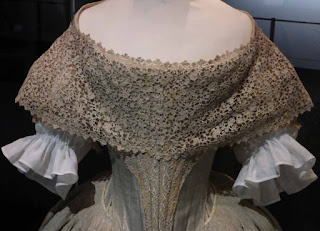 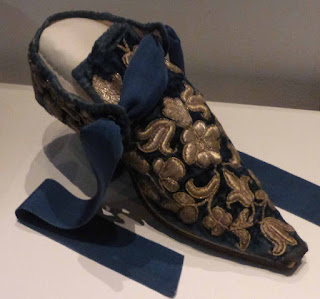 Pepys records his disapproval of the debauchery and excess at court: “The King does mind nothing but pleasures and hates the very sight or thought of business.” However he was himself frequently unfaithful to his own wife and recorded his escapades (and occasional remorse) in his diaries in a form of shorthand.

Pepys lived through the devastation of the plague (the exhibition records he chewed tobacco in the belief it would keep infection away) and the destruction of the Great Fire of London in 1666 when he borrowed a cart to take away his money and valuables and buried his parmesan cheese in the garden. His house survived; we don't know the fate of the cheese. But perhaps his greatest physical challenge came in 1658 before he started his diaries, when he had a bladder stone the size of a billiard ball removed without anaesthetic or antiseptic. His survival was probably due to being the first on the operating table that day, reducing the risk of infection. Seventeenth-century medical instruments on loan from the Royal College of Physicians – and a similar stone – illustrate this extremely painful procedure.

During his lifetime Pepys was best known for his important work in running the naval affairs of England, which brought him wealth and power, and resulted in the creation of a truly professional navy. He also went to the colony of Tangier as compensation assessor during the deliberate destruction of the city’s defences (below) – the English were pulling out and didn’t want any rival nation to benefit from them. 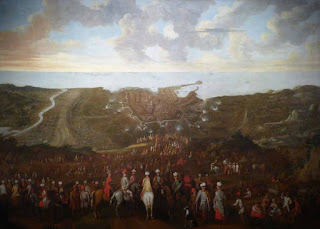 In later years he became an MP and president of the Royal Society, though while matters discussed there interested him, he confessed to not always understanding what he heard. It was the dawn of the scientific revolution and on display are books, documents and instruments relating to the experiments and findings.
The exhibition ends with the events of the Glorious Revolution, which resulted in the overthrow of Pepys’s great patron, James II. With the accession of William and Mary in 1689, he stepped down from office and spend his retirement indulging his many interests. 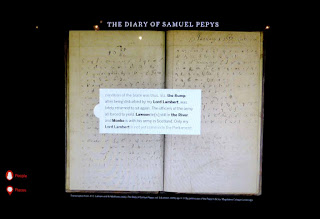 Missing from the exhibition are the actual diaries, which he wrote from 1660 – 69. When he died these and his library of 3000 books went to Magdalene College Cambridge, where they languished on a shelf until in 1819, prompted by the success of the publication of diaries kept by John Evelyn, a scholar there began decoding and transcribing them into longhand English. Three years and 54 volumes later he finished, only to discover that a key to the squiggles was in a textbook on a nearby shelf. As a condition of the bequest, the diaries may not leave the college, but there are electronic images of them on display, with transcriptions now available at the touch of a finger (above).