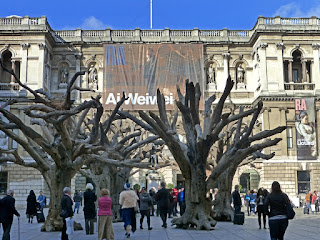 As part of a major exhibition at the Royal Academy by the Chinese artist Ai Weiwei, the front courtyard has been transformed into a grove of trees. The overall effect is stunning, and hugely popular with passers-by as well gallery visitors. The structures are made from sections of dead trees collected on the mountains of southern China. These were pieced together at Ai’s studio in Beijing to create the eight ‘complete’ trees on show. They’ve been interpreted as a commentary on the way diverse people have been brought together to form ‘One China’. 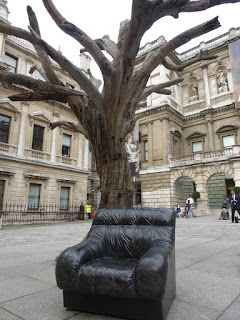 This marble couch in the grove is a reference to the Ming dynasty vogue for creating everyday objects from luxurious materials. While these served no practical purpose, they emphasised the wealth of the rulers of Imperial China. Some visitors were trying it out, but didn't stay there for very long - not the most comfortable seat around! 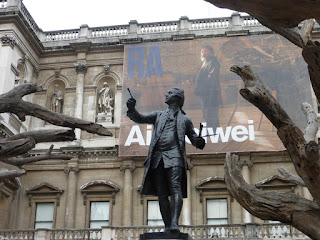 A picture of Ai Weiwei looks down on the statue of Academy's founder, Sir Joshua Reynolds, that usually dominates the courtyard. I couldn't help wondering what he would have made of it all.


Viewing the trees is free, but there is a charge for the rest of the exhibition, which is continues until December 3, 2015.
https://www.royalacademy.org.uk/
Posted by sandra at 12:49