'Baron' Terry Pratchett to be auctioned 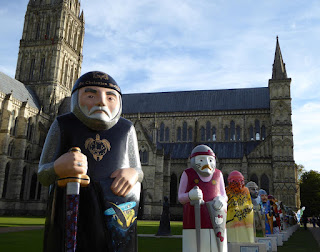 An almost life-sized fibreglass sculpture with the face of Sir Terry Pratchett is to be auctioned at Salisbury Cathedral tomorrow evening (October 1). It’s one of 25 statues of medieval barons, created to mark the 800th anniversary of the Magna Carta, which have been on display around the city since June.
The Discworld author died in March following a public struggle with Alzheimer’s disease.
Illustrator and long-time Discworld collaborator Paul Kidby wanted his figure to be a tribute to the author. It has a shield with Discworld on it, a helmet with a Discworld motto, and a cloak made up of about 70 of Pratchett’s most famous characters.
The statues of the Barons’ Charter Trail were reunited outside the Cathedral prior to the auction. (The Cathedral is home to the best-preserved of the four surviving copies of the Magna Carta.) 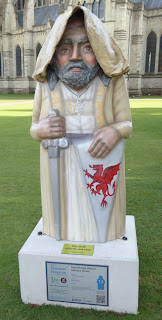 Among the figures is a Stonehenge Winter Solstice Druid Baron (above), created by New Zealand artist Mandii Pope. She says she wanted to keep her design local, and has been fascinated by pagan history and Stonehenge for years. 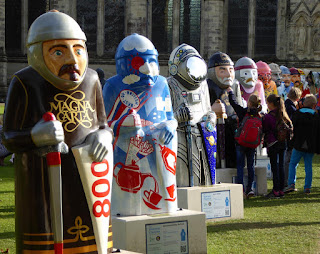 Others in the collection include (from left) a Magna Carta 800 Baron, a Quintessentially British Baron,  an Astro Baron, and even a Hello Kitty one (5th from left). The Conceptual Baron (below) stands in front of the Walking Madonna statue by Dame Elizabeth Frink, part of the Cathedral's permanent collection of contemporary artworks. 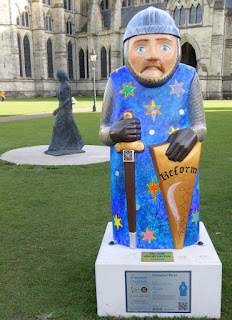 The money raised by the auction will go to the Trussell Trust, a charity that provides emergency food and support to people in difficulties.
http://www.thebaronscharter.org.uk/