I am Ashurbanipal, king of the world, king of Assyria 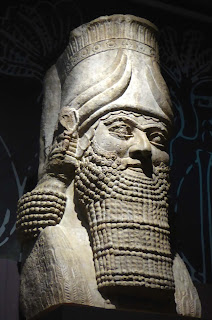 The title of this fascinating new British Museum exhibition comes from the claim of Assyria’s last great ruler, Ashurbanipal (reigned 669 – 631 BC). To say you are king of the world might seem like an exaggeration, but this man ruled an empire that stretched from the shores of the eastern Mediterranean to the mountains of western Iran. As we see in the more than 250 exhibits, some never seen in the UK before, he expanded by treaty and conquest what had been inherited from his forebears. He ruled from his massive capital at Nineveh, in present-day Iraq, where temples and palaces were adorned with sculptures of lions and human-headed winged bulls, such as this one from the palace of Nimrud (above) and an elaborate system of canals brought water to his pleasure gardens and game parks (below). 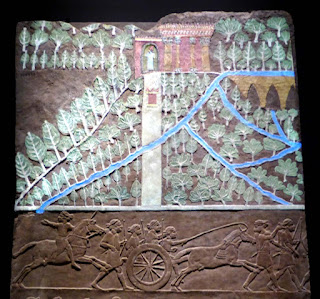 The lighting of the exhibits is imaginative. Special effects are used to project colours on reliefs, picking out the details and showing how they first looked. These three gods (below) once decorated the throne room in Nineveh. 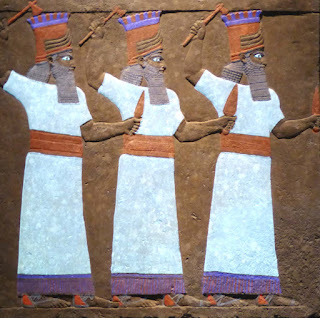 Ashurbanipal's empire was highly organised and efficient, arranged in provinces, each administered by a governor he had appointed. A system of royal roads criss-crossed the territory, allowing a sophisticated mail system to deliver orders swiftly. Obedience was rewarded, but there were brutal punishments for those who disobeyed; in one relief a surrendering general is about to be beheaded and in another, prisoners have to grind their fathers’ bones before being executed. His older brother, given the province of Babylonia to govern, rebelled against him and died in the attempt. Lord Byron painted a picture of the regime’s fearsome war machine in his poem, The Destruction of Sennacherib. (Ashurbanipal was Sennacherib’s grandson.)
The Assyrian came down like the wolf on the fold, And his cohorts were gleaming in purple and gold... 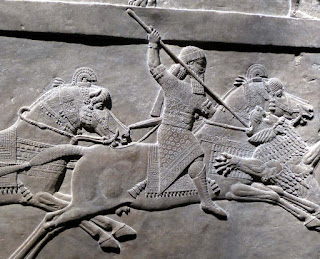 Ashurbanipal was ruthless. Millions of displaced people were forcibly resettled to cultivate barren land, build cities and produce luxury goods. But unlike his predecessors, he didn’t go into battle himself, instead sending a general to command his forces. He preferred to display his bravery and skills as a warrior in carefully organised lion hunts (where there was plenty of backup) and had them recorded in wall reliefs (above.) He prided himself on being literate and cultured, and is portrayed with a stylus tucked into his belt. On display is a practice letter to his father, composed in cuneiform on a clay tablet while still a boy. Elsewhere, he boasts about his achievements: “I am able to recognise celestial and terrestrial omens and can discuss them in an assembly of scholars ... I have carefully examined inscriptions on stone from before The Flood.” 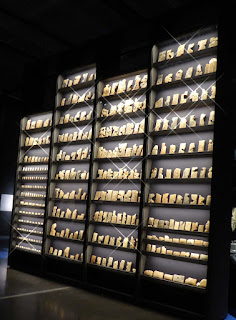 He created a huge reference library in Nineveh, aiming to unite under one roof all the traditional knowledge inherited from earlier times. This covered instructions for contacting the gods, letters, historical texts and administrative matters – all things he believed would help him rule. The exhibition has a whole wall of surviving fragments (above).  It must have helped – he held the throne for almost 40 years, longer than any of his ancestors. In later life, he enjoyed banquets and relaxing in his garden. Here, servants bring snacks of grapes, pomegranates and dates to a feast. 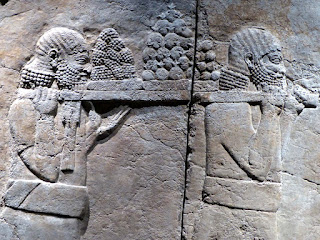 After he died, his son took over, but the empire began to fall apart with civil wars and invasions. In the ensuing battles, the palace was systematically demolished and the library burnt down. However, 30,000 clay tablets survived in the ruins, baked hard by the flames. The exhibition displays a whole wall of them (above). Their cuneiform writing, giving a detailed picture of life and beliefs in the ancient world, was first deciphered in Victorian times; researchers continue to study the fragments. 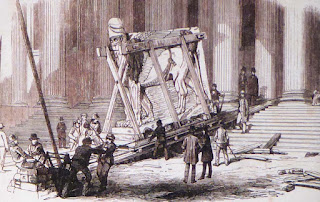 Nineveh was rediscovered in the 1840s. A young British explorer, Austen Henry Layard, began excavations with initial financing by the British Ambassador to the Ottoman Empire, which then occupied the area. The Ottomans authorised the Ambassador to export some of the sculptures found to England, and the first of these arrived at the British Museum in 1847. A sketch of this event appeared in The Illustrated London News on 28 February 1852 (above). The finds sparked a fashion for Assyrian designs in painting and art. The winged bull and the lion hunt even found their way on to Victorian jewellery.
In recent years, many archaeological sites in Iraq have been systematically targeted and destroyed by ISIS, including those where exhibits were found. The final section of the exhibition highlights the challenges faced in protecting Iraqi cultural heritage, and outlines the British Museum’s scheme for training 50 Iraqi archaeologists in rescue archaeology. At the same time, the cuneiform tablets are being digitised, which will enable their closer study and ensure that they are available to all to see.