Venice's Festival of the Redeemer 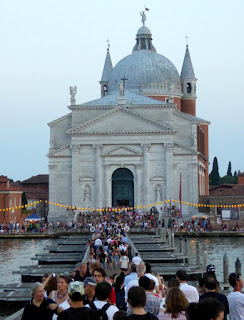 Venice is famous for its carnival and festivals, but the oldest continually celebrated date in the Venetian calendar is the Festa del Redentore - the Feast of the Holy Redeemer - held annually on the third weekend of July.
The festival began in the 16th century, to mark the end of the terrible plague of 1576, which killed 50,000 people, including the great painter Titian. As a gesture of thanksgiving, the Doge commissioned the architect Palladio to build a church on the Giudecca island. It was consecrated in 1692 and so that the Doge could walk there in procession, a temporary bridge across the canal was made of barges.

This bridge-building tradition continues today. For several days before the festival, the pontoons are moved into place, and by Friday (above), thousands of people are able to stream across it to the church. 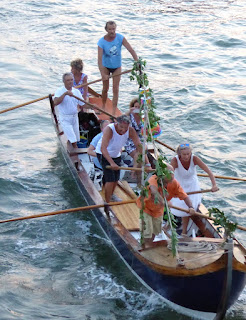 At the same time, hundreds of little craft, often decorated, make their way along the Giudecca canal. By dusk, it is packed with vessels of all kinds, their occupants feasting and celebrating. You can barely glimpse the water between them. 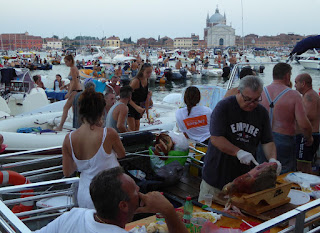 Revellers without a boat pack the rooftops, balconies and pavements overlooking the canal – many enjoying elaborate banquets laid out on picnic tables. Everyone is in holiday mood. 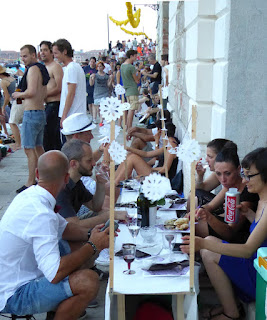 At 2330 comes the moment everyone has been waiting for: fireworks, set off from nearby pontoons, light up the sky. This year they continued for 45 spectacular minutes. 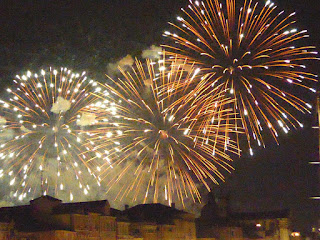 As the boats begin to depart,  many people end their evening by going to the Lido, where they sit on the sand and wait for the dawn. For everyone, it's magical end to an unforgettable occasion.
Posted by sandra at 23:31